Two ANZAC SAS troopers watching and waiting for the enemy. As you can see, like all Special Forces at that time in Vietnam, the men could select whatever camouflage uniforms suited them best and were the most comfortable. That was the same with the weapons they carried... personal choice and mission suitability was the order-of-the-day when selecting personal weapons. Our pointing ‘Team Leader’ is wearing a set of the U.S. made ERDL camouflage combat uniform first developed by the U.S. in 1967 with limited supplies being issued to Special Forces units in 1968. ANZAC initiative ensured that anyone who wanted a set could obtain one! The Team Leader’s weapon is a heavily modified standard L1A1 Self Loading Rifle with a forward pistol grip, a shortened barrel and fitted with a 30 round box magazine from the 7.62mm Bren Gun. His weapon is also camouflaged as is his face. All kinds of additional ammo pouches and extra water canteens are added onto his webbing and back pack. The second figure is also carrying a modified SLR with the longer Bren magazine attached. This SAS trooper is wearing a locally-purchased ‘Tiger Stripe’ uniform originally designed for South Vietnamese paratroopers and particularly suitable for jungle conditions. 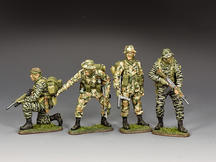