The ‘Quan Canh’ (military police) guarded army headquarters, government buildings and prisoner-of-war camps, escorted convoys and performed other typical military police duties... similar to their Autralian and U.S. counterparts. He is shown with his steel helmet painted gloss black with red and white stripes and ‘QC’ on the front. A black armband with the same letters and a white braided whistle-cord round his right shoulder can also be seen. His pistol belt supports a black holster containing the ‘M1911’ .45 cal. pistol and a pair of handcuffs. He wears standard US Army, but locally-made OD fatigues and black-shined boots. QC’s would often accompany U.S. and Australian Military Police to act as interpreters with the local people. 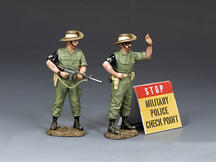 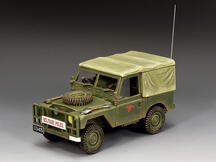