The Assassination of Heydrich 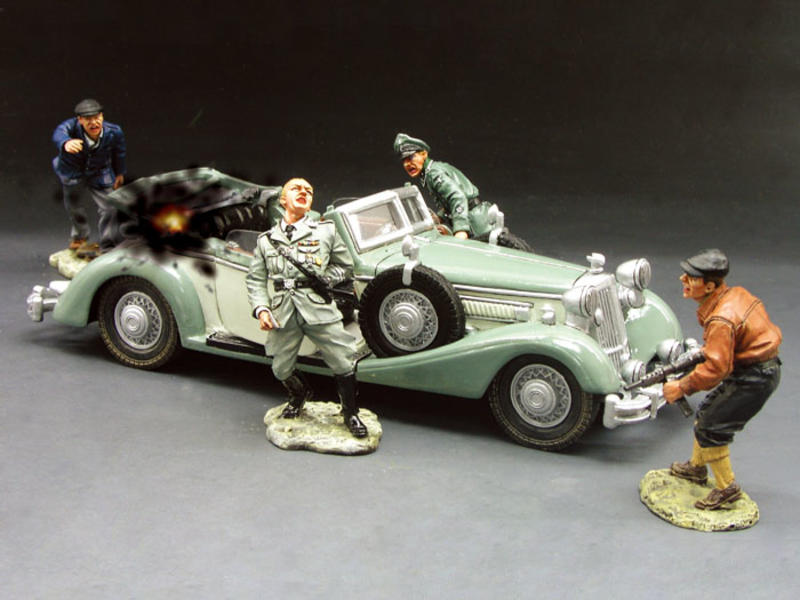 One of August's big surprises will be this dramatic set depicting the well-deserved fate of one of the Third Reich's most feared and despised characters... Reinhard Heydrich. Himmler's own right-hand man, Chief of the dreaded SD and Reichsprotektor of Bohemia Moravia, Reinhard Heydrich was also one of the main architects of The Final Solution". He was stalked and attacked by two very brave Czech patriots in May 1942. Although his assassination led to the deaths of many thousands of innocent men, women and children this was proof, even to the Nazis, that they were not "invulnerable". This, our first "Strictly Limited" of 2007 depicts the actual moment of the attack on Heydrich when he was fatally injured by the bomb thrown by one of the assassins. This special set includes Heydrich himself... his SD driver ... and the two brave Czech patriots Jan Kubis and Josef Gabcik and a superb model of the Reichsprotektor's Staff Car. Inside the special "Strictly Limited" box is also a four-page summary of Heydrich's infamous career and important background details of the attack and its tragic aftermath. This particular "Limited Edition" comprises just 999 sets."