Cardinal Richlieu, the “Red Eminence”, and the power behind King Louis XIII. Often known as the King’s “First Minister” he wielded enormous power and influence not just in France but throughout Europe at that time. He is also a leading character in Alexander Dumas’ “Three Musketeers” and the Musketeers main antagonist. We show him at the height of his power...sword drawn and wearing a suit of armour always prepared to defend what he believes is in France’s best interest. 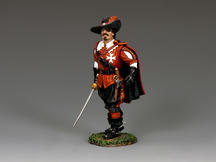