One of American’s greatest commanders of WW2, or indeed any of the wars and conflicts the U.S. has fought in during its history. Chester William Nimitz was born in Fredericksburg Texas in 1885 and graduated from the U.S. Naval Academy in 1905. When America entered WW2 in December 1941 he was promoted to Commander In Chief, Pacific Fleet with the rank of admiral. Nimitz controlled the ‘Pacific Ocean Areas’ while General Douglas MacArthur took over the land campaign. Admiral Nimitz was also present at the Japanese surrender on board the USS Missouri in Tokyo Bay on September 2, 1945. Our figure shows Admiral Nimitz dressed in ‘Khakis’, the everyday wear of U.S. Navy officers in the Pacific Theatre of Operations during WW2. 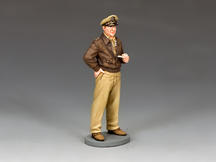