Next to “Sitting Bull”, probably the most famous of the Sioux war chiefs was Crazy Horse. An Oglala Lakota he took up arms against the U.S. government because of their many broken treaties and constant encroachment on Indian lands. A skilled leader and a brave warrior, it is said that he led the attack that out-flanked Custer and his men at the Little Bighorn and sealed their fate. Our figure shows him carrying his Winchester repeating rifle and charging his pony towards the battle. 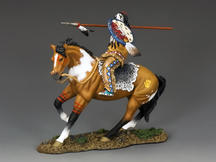