A great little set of THREE additional ‘Bootnecks’ (R.M. slang for Royal Marines) yomping their way across East Falklands on their way towards Stanley. Each Marine carried over 80 pounds of equipment and supplies as well as their personal weapons and extra ammunition. Originally the Marines and Paras had expected to be transported forward by helicopters, but after the ‘Atlantic Conveyor’ which carried these aircraft was sunk the troops had to march across the island carrying everything on their backs. K&C’s 3 X ‘Booties’ are carrying an assortment of weapons... The ever-reliable L1A1 SLR (Self Loading Rifle), the venerable L4 Bren LMG (Light Machine Gun) and the Belgian – designed, British-built L7A2 GPMG (General Purpose Machine Gun). All naturally are in their standard British military DPM uniform and proudly wearing their green commando berets. 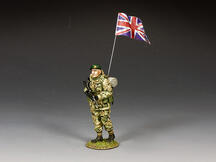