In August 1940, just a short time after the Fall of France and the evacuation of the British Expeditionary Force from Dunkirk, a small group of men, the British Purchasing Commission, arrived in America to seek out all kinds of military hardware and transport for the much depleted British forces. Among their most urgent requirements was the need for ‘Tank Transporters’, those special vehicles urgently needed to move tanks to and from the battlefield and help recover damaged fighting vehicles and return them to their repair depots behind the front lines. One of the BPC’s first visits was to the Diamond T & Company of Chicago who had been developing a heavy truck / tractor and trailer for the U.S. Army. The British immediately recognized that this could fulfill their tank transporter needs. An order for 200 of these very special combinations was placed immediately and so began... The Diamond T at war! The M19 Tank Transporter was a heavy tank transporter system used during WW2 and for many years afterwards. It comprised a 12-ton, 6x4 M20 Diamond T Model 980 truck / tractor and a companion 12-wheel M9 trailer. Almost 6,000 of these combinations were produced between 1941 and 1945 and supplied to all Allied armies fighting in all the main theatres of war. The British Army alone received over 1,000 of these vehicles and they remained in front-line service until the late 1950’s with the last of the breed being retired to an army museum in 1971! This King & Country model is the largest, mixed-media (polystone, white metal and resin) model K&C has ever produced. It measures almost 24” (61cm) in length and is in the markings of a typical U.S. Army vehicle from the time of Normandy (June ’44) until May 1945. A driver is included. The model comes in its own specially-designed box and contains a 4 page, full colour leaflet complete with photographs and background information. If you collect Allied armour then the Diamond T Tank Transporter is destined to become one of the centerpieces of your collection. 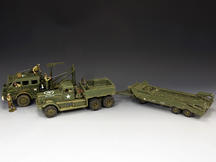 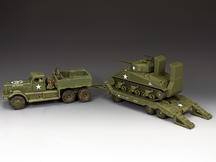