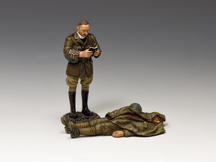 A British Army Padre reads a simple prayer over the dead body of a fallen “Tommy”.

The design of the dead soldier was inspired by a similar figure which can be seen on the powerful Royal Artillery Memorial near London’s Hyde Park.

During the Great War, three Army chaplains won the Victoria Cross, Britain’s highest award for gallantry and 179 were killed-in-action. 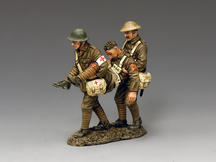 A British Army medical orderly is assisted by a soldier to carry a badly wounded “Tom” back to the nearest Aid Station situated in or close behind the actual front line position. 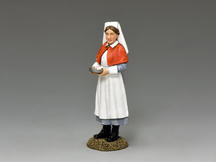 Between 1914 and 1918 over 10,000 regular and reserve members of Queen Alexandra’s Imperial Military Nursing Service were at work in France, the Middle East, Italy, East Africa and India. Wherever they went they were easily recognized by their grey and white uniforms and scarlet red capes. This nurse is typical. 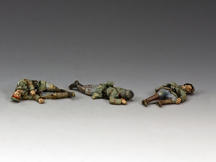 For these three fallen “Soldaten” their war and suffering is over... 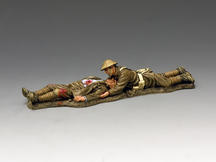 Even though the battle still rages above their heads one “Tommy” has crawled into “No Man’s Land” to try and pull a wounded mate to safety... 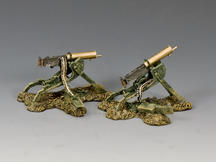 Two abandoned “Maschinengewehr 08” or MG08’s were the German Army’s standard machine gun during World War One. Adapted from the original 1884 “Maxim” gun these weapons were widely used on all fronts the Kaiser’s Army fought on...with deadly effect.

Their nominal range was 2,000 meters although they could be deadly up to 3,500 meters!

Allied troops hated them with a vengeance because of the huge casualties they inflicted. If and when these guns were overrun attacking soldiers would often, without hesitation, kill the gun crews, even if they tried to surrender!

These two guns fit perfectly with set no. FW186. As the new 20th Century began fashions and styles also began to change...even in China. Our stylish young Groom (with short Western hair-style) stands next to his blushing new bride. As the new 20th Century began fashions and styles also began to change...even in China. Our stylish young Groom (with short Western hair-style) stands next to his blushing new bride.

Established in 1873 this unit was the fore runner of today’s Royal Canadian Mounted Police.

It was founded to patrol the vast Northwest Territories of the Dominion of Canada and provide law and order where none was.  From the beginning it was organized like a British Army cavalry regiment of that time and was to wear red coats.

Our two “Mounties” are dressed in typical parade dress which remained in use from about 1876 until 1903.  Here, worn with a bandolier of rifle ammunition for the Winchester carbine.  The winter fur cap with the yellow “bag” and the white gauntlets is also worn alongwith a holstered sidearm attached to a long white lanyard.

HOW TO GET THESE FIGURES? AVAILABILITY: All of the above sets will be available in late April or early May...Look out for them...And a great big bunch of other new items in the upcoming May Dispatches!