So, without too much preamble here goes…

BEING RELEASED THIS JANUARY…

One of the most popular single figure pieces of K&C’s WW2 U.S. Army Collection has always been our U.S. Military Police on motorcycles.

Here is the latest one, sitting on his motorbike and carrying a Thompson Submachinegun.

Perfect for all kinds of WW2 displays and dioramas.

Most, if not all prewar SS units had various kinds of bands of musicians. These bands were generally financed by public donations.

By the late 1930’s , every SS foot ‘Standarte’ (Regiment) had a full band of between 20 and 40 musicians. In addition each ‘Standarte’ would have a ‘Drum & Fife Corps.’  The premier SS formation ‘Leibstandarte Adolf Hitler’ was no exception… 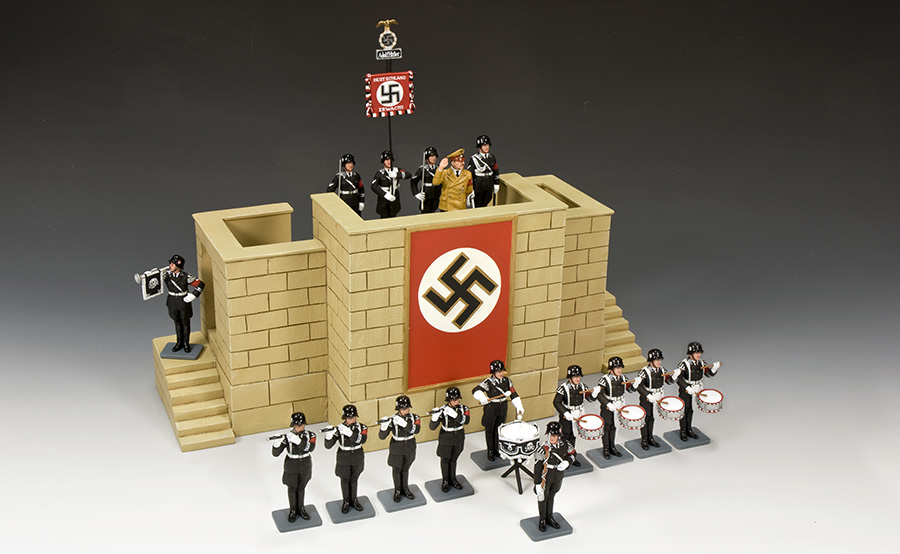 This presentation 10-man set comprises 1 x Drum Major, 1 x Kettle Drummer, 4 x Side Drummers and 4 x Fifers all in one box. They can be easily recognized by their white leather belts and accoutrements... only worn by the LAHSS.

Every subunit within each SS ‘Standarte’ had a “Trumpeter”. This figure, stands to attention in a typical parade pose while playing his trumpet from which hangs a hand-embroidered banner.

The NSKK (German: Nationalsozialistische Kraftfahrkorps) was the paramilitary National Socialist Motor Corps that existed from 1931 to 1945.

The NSKK served as a training organization for young people wanting to learn how to operate and maintain high performance motorcycles and automobiles. The NSKK was also used to transport Nazi Party members and officials all over Germany before 1939.

With the outbreak of war in September 1939 most of its members were mobilized into the Wehrmacht and Waffen SS as drivers, mechanics, instructors and dispatch riders.

Our prewar NSKK rider is dressed in their distinctive grey uniform and wearing their own special style and design of ‘crash’ helmet.

3. "On The Banks of the Little Bighorn" ‘Sitting Bull’ was a Lakota Sioux leader who led his people during their many years of armed resistance to United States government policies and the increasing encroachment of American settlers onto Indian lands.

Before the Battle of the Little Bighorn he had a vision where he saw many U.S. Cavalry soldiers falling upside down from the sky into the Indian camp. This vision was taken by many of his followers to predict a major Indian victory over the white soldiers.

And so, on June 25, 1876 it came to pass on the banks of the Little Bighorn when General George Armstrong Custer and more than 250 men of his 7th Cavalry met their end attacking Sitting Bull’s camp and his combined force of Sioux and Cheyenne warriors.

A young Lakota Sioux warrior urges his war pony into a gallop as he aims his captured U.S. Army Colt revolver at the hated ‘Long Knives’.

This Cheyenne ‘Dog Soldier’, his face painted a fierce- some yellow colour prepares to leap off his horse and attack one of the wounded cavalry troopers.

No one can actually remember this Sioux Indian’s name before the battle BUT after the battle where he captured one of the 7th Cavalry’s ‘Stars ‘n’ Stripes’ guidons he was forever known as ‘American Flag’.

A special ‘Value Added Bonus Set’ of four of our finest fighting Saracens collected into one set with all-new painting and colour schemes.

Since we began to ‘reintroduce’ the Vietnam War into our K&C inventory it has proven to be one of our most popular and dramatic ranges of figures and fighting vehicles. Here are the latest additions… Three Marine ‘Grunts’ take the opportunity to rest their legs and ride ‘piggy-back’ on an M113... You can also put them on some of our other ‘Vietnam’ vehicles too or just have them sitting around or on top of any display or diorama.

K&C’s Aussie M113 was a big success and so it was only fair that we brought out the original U.S. Army version.

The M113 was first introduced into Vietnam in the early 1960’s where it became one of the most iconic fighting vehicles of the entire war.

This new K&C model has an all-new armoured turret complete with a .50 cal. heavy machine gun as well as a pair of M60 machine guns on each side of the Carrier. 2 x all -new crew figures are also included.

FACT: Strangely enough the USMC did not have the M113 during the Vietnam conflict in its inventory... Whenever they needed them they were supplied by the U.S. Army, hence our M113 is clearly marked U.S. Army.

Also of interest... the Viet Cong and NVA (North Vietnamese Army) nicknamed it “The Green Dragon”!

To date over 80,000 M113’s in various adaptations and figurations have been manufactured and it still ‘soldiers-on’ in many armed forces around the world.

A kneeling vehicle commander and a walking crewman complete with jerrican and M16 carbine.

A solo figure of a vehicle commander armed with his M16 carbine and shoulder-holstered .45 cal. Colt 1911 Automatic.

This figure also has a connection with Dale Dye...The actual Col. Sink was the Commanding Officer of the 506th Parachute Infantry Regiment of the 101st Airborne Division which of course featured the men of “Easy company” from “Band of Brothers”.

Capt. Dye, in addition to training all of the actors and extras for the Television series also played Col. Sink in the series.

Our figure shows the ‘real’ Colonel Robert F. Sink in his jump suit delivering orders to his men prior to the D. Day Operation.

A regular prewar U.S. Army officer he had a long and distinguished military career and rose to the rank of Lieutenant General before retiring in 1961. He died in 1965.

After the success of the “Normandy” version of this British Armoured Car we had quite a few requests to produce an 8th Army Humber... and here it is!

This one has the normal ‘desert sand’ colour oversprayed with a ‘stone grey’ camouflage pattern. The vehicle includes a commander in the open turret hatch. Our model is in 7th Armoured Division, “The Desert Rats” markings.

An additional vehicle to a very popular range of LRDG / SAS trucks and jeeps issued by K&C over the years.

This 3rd “Chevy” is painted in a very attractive sand / faded green finish and comes with an Arab head-dressed driver, and armed with the Boyes Anti Tank Rifle on a pindle mount on the rear of the vehicle.

These LRDG vehicles have always been very popular with “Desert War” collectors and occasionally appear on ebay ... So it’s good to add an all-new one.

b) go for a little walk behind the nearest sand dune to perform a necessary human function ... You decide.

‘Dusty’, map in hand, has acquired, after a few raids and missions, some authentic Afrika Korps souvenirs including the cap, a map case and an MP40 ‘Schmeisser’ Machine Pistol.

A Scottish member of the patrol, wearing an old “Solar Topee” sun helmet and carefully scrutinizes the surrounding landscape for any signs of life as well as any approaching Germans or Italians. Can also fit easily onto the rear of the Chevy!

Over the years K&C has produced quite a number of automobiles associated with Hitler. Most recently we produced the Mercedes Benz 770 ... Now we’re introducing another of the vehicles in the Fuhrer’s very public fleet ... The Mercedes 540.

Here, you see Hitler and Mussolini together in the 540 after having signed “ The Pact of Steel” earlier in the day. Both look very pleased with themselves ... as well they might ... for the moment .

This set also includes a seated SS driver and has the two flags on the front of the 540. Those of Fascist Italy and Nazi Germany.

The Führer, clutching a badly bruised right arm walks together with Field Marshal Keitel, Luftwaffe Chief Hermann Goring and Head of the Reich Chancellery Martin Bormann on their way to see the wounded officers.

A handful of photos survive of this short walk which proved to Germany and the world that Hitler had, once again survived a deadly attack.

Our 4-figure set is based on one of the photos.

Well, my friends that’s January for you let’s all hope for a brighter… happier… and more peaceful 2020.