WELCOME to this month’s ‘DISPATCHES’ and a great little ‘mix’ of selections that add on to and fit in with some of K&C’s most popular ranges!

The Battle of the Bulge, also known as the ‘Ardennes Offensive’ was the last major German offensive on the Western Front.

Launched in the early morning of December 16, 1944 the Germans achieved total surprise along an 80 mile stretch of the Allied lines running through Belgium and Luxembourg.

At first some of the American units fell back in disarray, surprised by the size and ferocity of the attack.  Others however held bravely on and managed to delay and divert some of the German advances. The M36 ‘Jackson’ was the best American ‘tank destroyer’ of WW2. It combined the already well-proven and reliable chassis of the M4 Sherman and combined it with sloped armor and a massive new turret mounting a powerful 90mm main gun.

First conceived in 1943, the ‘Jackson’ began arriving in Europe in October 1944 where it mostly replaced the older M10 Tank Destroyer.

Postwar the M36 saw extensive combat in the Korean conflict as well as serving with the armies of France, Italy, Yugoslavia, South Korea and many others.

Our K&C M36 ‘Jackson’ comes ‘snow-camouflaged’ and with a vehicle commander figure.

Special Note: As you can also see among the photos attached the M36 is supported by 3 x sets of our upcoming ‘Winter GI’s’ which will be released in December, just in time for the 75th Anniversary of The Battle of the Bulge and Christmas.

Many collectors are familiar with the famous and colourful images of the Curtiss P40 with their distinctive ‘Sharks Mouth’ and flying tiger insignia (designed by Walt Disney)… How many know of the man behind the ‘Flying Tigers’.. 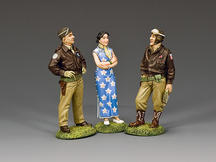 Claire Lee Chennault was a Texas-born pilot who served in the US Army Air Corps for many years before retiring in 1937 and joining the Nationalist Chinese Air Force to help train them to fight the Japanese invaders then rampaging across China.

In 1940 Chennault was sent to America to obtain 100 modern fighter planes, pilots to fly them and ground crew to carry the fight to the enemy.

Although America was not officially in the war, President Roosevelt secretly authorized 100 pilots (enough to man at least 3 squadrons) and almost 200 other ground crew personnel to be recruited alongwith approving the sale of 100 Curtiss P40’s.

Together they would form the ‘American Volunteer Group’ and Claire Chennault was to be its leader.

Anna Chan Chennault was Chennault’s second wife. Originally a reporter and war correspondent she became a prominent Republican member of the US China Lobby and a powerful woman in her own right. During WW2 she often wore traditional Chinese dress.

David ‘Tex’ Hill was one of the best known of the ex military aviators who were recruited to join the Flying Tigers. Originally trained and qualified as a US Navy pilot he would become an ‘ace’ with at least 6 victories while flying with the ‘Tigers’.

After his China service he would transfer to the Army Air Corps and eventually the US Air Force where he remained until his retirement in 1968 as a Brigadier General. 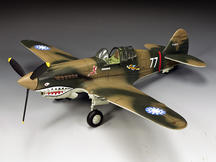 This is the second version of our classic Curtiss P40 ‘Flying Tiger’ warbird. For several years now K&C collectors around the world, especially in Asia, have been requesting another release of this great aircraft model... well here it is!

When the American Volunteer Group was formed its fighter aircraft came from the Curtiss assembly line producing P40 models for Britain’s Royal Air Force in North Africa. Part of this British order (100 aircraft) were crated and sent to Burma during the Spring of 1941. Once in Rangoon, they were assembled and sent on to China where they had their special markings added.

Our K&C model is numbered #77 and served with the ‘Flying Tigers’ 3rd Pursuit Squadron and comes with a sliding canopy and rotating propeller. The Garrison Sergeant Major is responsible for all the important state occasions such as ‘Trooping The Colour’... as well as Royal Weddings and Funerals.

This latest K&C Ceremonial figure belongs to The Coldstream Guards and stands firmly at attention, pace stick under one arm as he surveys the troops before him. 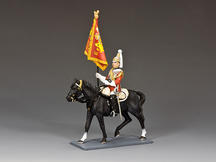 One of the most striking of the Household Division’s mounted soldiers on parade is ‘The Sovereign’s Standard Bearer’.

An ensign or junior officer is always chosen to carry the personal flag presented by the sovereign to each of her Household Cavalry regiments. (The Life Guards and The Blues & Royals).

Our Sovereign’s Standard Bearer belongs to the Life Guards. 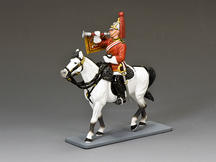 Trumpeters in cavalry regiments are always mounted on grey or white horses... and our Life Guard Trumpeter is no exception.

Another item that has been much requested is the Roman Ballista… 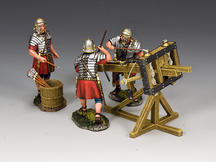 The Ballista, sometimes called the bolt-thrower was an ancient missile weapon that launched a deadly projectile at a distant target.

Originally designed by the Greeks, the Roman Army improved and adapted it to meet their more mobile military requirements as they campaigned throughout the Mediterranean and across Europe.

Because of its mobility and adaptability it could also be used on ships as well as to defend fixed fortifications.

Many different sizes and styles were employed however the most numerous in service were the smaller, easily portable versions similar to the one K&C has made. A crew of three Legionaries was usually employed to transport the weapon, assemble it and fully operate it in battle. 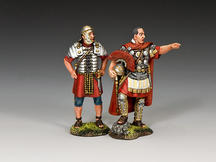 Rarely would ballistas be in action on their own... a group of 5 or 10 of the weapons would be gathered together under the command of a senior Centurion and his bodyguard.

5. "On Campaign With The Emperor"

Last month we presented our newest figures for the ‘Age of Napoleon’. Now, we add two more pieces… 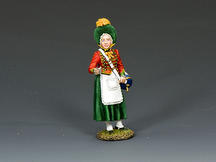 Armies of the Napoleonic era often had female followers attached to them. Only the French Army ‘institutionalized’ and organized them!

The ‘Cantiniere’ was included on the official regimental strength of a particular unit.

Usually she would be the wife or widow of an NCO (non commissioned officer) and was recognized and sanctioned to be the official regimental sutler or canteen keeper supplying wines and spirits to the men.

Most times these women would also wear some parts of the regiment’s uniform and colours.

In battle they would help care for the wounded and even on occasion bear arms. 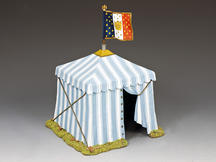 Previously available as only part of a larger set this ‘second edition’ now carries the Emperor’s Personal Standard flying above it. Most soldiers, given the opportunity, like to grab a ‘souvenir’ or two... This ‘leatherneck’ has picked up one of the best – a Japanese battle flag. Rifle in one hand ‘souvenir’ in the other he takes it back to show his buddies. 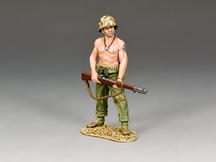 Taking a break but not dropping his guard... This figure looks great alongside USMC017 “The Souvenir Collector”. Please note the USMC tattoo on his left shoulder. Cautiously moving forward, ‘Tommy-gun’ ready, a Marine NCO makes sure the other Marines are following. 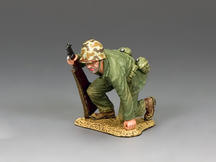 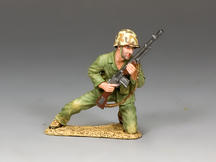 7. "Last of the French Commandos" Four more French Commando (Fusilier Marins) going into action. As the Bren gunner opens fire, two riflemen and one Sten gunner back him up. To accompany our recently released British / Scots “winter” infantry we decided to add on a kilted bagpiper of the Royal Scots Fusiliers as he would have appeared in late 1944 / early 1945. Although chilled to the bone by the terrible winter weather this ‘hardy soul’ is still brave enough (and sturdy enough too) to wear his regimental kilt! 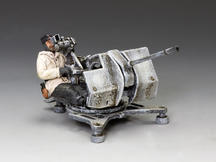 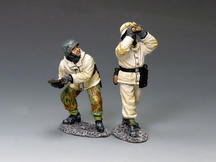 If you get the “gun and gunner” you definitely need the “loader” and “spotter”...All well-wrapped up against the worst of the winter weather...either on the Eastern or Western Fronts! Wearing a traditional forest-green frock coated uniform this Russian officer observes the enemy positions before giving the order to "fire!" By the middle of 1942 many German vehicles were being camouflaged…including the Czech-made 38(t). Here is our version… Proof that not all Germans were “monsters’…This ‘soldaten’ shares his bread and jam with a young girl in one of the occupied countries.

And that, as I usually say, is that for another month.