WELCOME TO OCTOBER and this month’s ‘DISPATCHES’…  I’m presently writing this on the Saturday before I fly off to Chicago for the big show and after we sent off all of our displays and dioramas earlier this week.

Now, if you have never been to CHICAGO SHOW you are already too late for this one… However start planning for 2020 one which will be the 40th Anniversary of this world-beating toy soldier event and promises to be a BIGGIE!!!

BEING RELEASED IN OCTOBER…

First of all find a large, empty space somewhere in Ancient Egypt conveniently if possible, close to the River Nile…

Then… gather together thousands of skilled craftsmen, building workers and slaves.  After that, spread out your construction plan on the desert sand and explain to the assembled multitude who is doing what, when and where… and begin work!

Also give them a ‘works deadline’ while, at the same time, informing them of the dire consequences should any or all of them fail to meet your strict building schedule…

And there you have it… how to build a pyramid in one simple lesson! 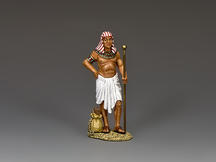 While the Architects and Engineers are responsible for the overall design of the Pyramid, the Master-of-Works is the man in charge of the building site itself and the workers employed to transform the 2 dimensional plans into 3 dimensional reality. A strong (by necessity) labourer tasked with carrying the many, many loads of clay bricks up from ground level to the upper work stations as the Pyramid rises up day after day. Working under the blazing heat of the Egyptian sun, from dawn till dusk, demanded copious amounts of fresh water for the workers.

These 2 men are transporting a large stone jar of fresh water to a central point near the Pyramid where the teams of individual female Nubian ‘water carriers’ would gather to fill up their own smaller vessels. 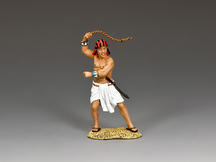 As the Egyptian builders used thousands of slaves on their construction sites they in turn were under the direct control of ‘Overseers’, usually Egyptian but sometimes slaves themselves who had ‘risen up through the ranks’ to the position of ‘overseer’.

Most of these ‘Overseers’ would use physical punishment to both ensure obedience and discipline... Some more than others.

General Walter Model was one of Hitler’s most able and trusted Wehrmacht commanders. A dedicated Nazi and personally loyal to Hitler, Model had more than fulfilled his battlefield duties several times over in Hitler’s eyes on both the Eastern and Western fronts. 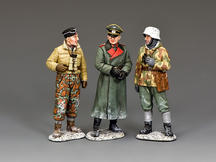 Here we see Model, in the greatcoat, together with a senior Panzer commander and one of his infantry officers as they discuss their attack plan during the early stages of the ‘Battle of the Bulge’.

These three officers make a welcome addition the other just-previously released BBG sets or indeed any of K&C’s ‘Winter Germans’ currently available. A poignant little set of a British paratrooper, Lee Enfield .303 rifle in hand studying an ARNHEM street sign on the outskirts of the famous Dutch town. 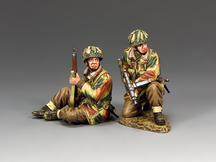 A little way forward of MG078 and further into Arnhem, two British paratroopers have already come under fire from the Germans and taken cover.

As one Para sits the other kneeling Para cautiously looks out to see where exactly the enemy fire is coming from.

There two Paras look great next to a wall or building or perhaps even an abandoned jeep... You make the decision! 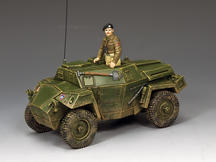 Anyone who collects ARNHEM ’44 is sure to know about the classic movie ‘A Bridge Too Far’ (1977) directed by Sir Richard Attenborough that depicted the ill-fated ‘Operation Market Garden’ in general and the Arnhem battle in particular.

Among the many great movie stars in this WW2 epic was Michael Caine who depicted Lt. Col. J.O.E. Vandeleur of the Irish Guards in the film.

Lt. Col. Vandeleur (Michael Caine) stands erect in his Humber scout car as his forces attempt to reach Arnhem... just like in the movie!

Journey back in history more than a century before and we’ve landed deep in a European field, somewhere on the continent in the Napoleonic Era. 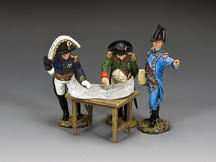 A brand-new sculpt and painting of an older, long-retired favourite...

The Emperor pores over one of his campaign maps as he traces out the positions of his own troops... as well as his enemy's.

SPECIAL NOTE: To accompany this great set a new version of the Emperors’  Personal Tent will soon be available complete with Napoleon’s own standard flying over it. 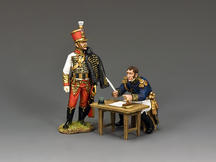 Nearby the above set NA448, is one of Napoleon’s Staff Colonels writing down the Emperor’s orders as well as issuing his instructions ready to be delivered by one of his Aide de Camps to his various Field Commanders. 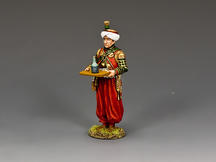 A couple of months back we released a special ‘personality’ figure of Roustan, the long-serving Mameluke bodyguard and valet to the Emperor.

Here we see a ‘dismounted’ Roustan bringing forth a simple tray which holds a bottle of the Emperor’s favourite brandy. 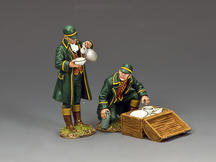 Talking of food and drink...

Two of the Emperor’s own personal staff unpack some crockery for a meal before the battle as well as pour some water into a bowl for the emperor to refresh himself.

These two green-liveried servants belong to Napoleon’s own household and were often former soldiers themselves.

They would follow him on campaign and take care of all his personal requirements and attempt to make his life on the field of battle as comfortable as possible.

5. "A DIFFERENT KIND OF BATTLE... A very different place!"

From the lush green fields of Western Europe to a hot and humid, monsoon-drenched battle in a rubber plantation in South Vietnam… that’s quite a jump!

But for K&C, the difficult takes some time… the impossible a little longer!

THE BATTLE OF LONG TAN in August 1966 has gone down in Australian military history as one of their ‘Finest Hours’ during the Vietnam War.

‘D’ Company of the 6th Royal Australian Regiment (just 106 men) were patrolling through a rubber plantation not far from their base at Nui Dat, South Vietnam when they were confronted by a much larger combined force of North Vietnamese and Viet Cong infantry of about 1,500 strong.

Pinned down and vastly outnumbered the Australians fought courageously and held their defensive perimeter against numerous enemy attacks over many hours.

Accurate long-range artillery fire helped the Aussies hold on while a relief force was readied and eventually reached their beleaguered position.

Australian casualties were 18 killed and 24 wounded, Australia’s greatest one-day loss during its involvement in the Vietnam War.

Long Tan is now remembered and honoured as a symbol of Aussie military bravery, endurance and teamwork in a very tough battlefield situation. Backing him up are two lying prone soldiers... one fires the American M60, belt-fed machine gun while the other utilizes the standard L1A1 SLR (self loading rifle).

The fourth member of the section is the radio man holding his M16 rifle in one hand while he calls in a SITREP (situation report) on the handset of his PRC-25 radio set.

SPECIAL NOTE: The Battle of Long Tan Set #2 is already at the production state and again features 4 different Australian infantry in dramatic action poses to complement and add to set #1.  For release in a few months time.

Well, October will soon run into November and November’s next to December and… before you know it… it’s Christmas!

So, without further ado…. Here is K&C’s Annual Christmas Offering… 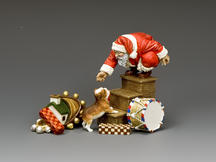 When Santa clambers down a chimney he always hopes for a quiet and peaceful household and, perhaps, a cool glass of milk and a plate of cookies to greet him.

Well, at least, that’s what I was always told when I was a wee boy back in Bonnie Scotland in the dim and distant past!

So, you can imagine his surprise to be greeted as he emerged from the empty fireplace with a very suspicious bulldog who has just bit a lump out of Santa’s bright red costume.

The startled Santa has retreated up a little step ladder as the bulldog waits patiently at the bottom... Santa’s bag of toys (containing some K&C sets) is also included. A great little set. 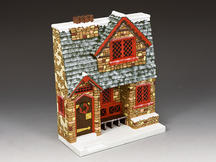 A long-promised and very attractive little rendering of Mr. Claus’ abode, suitably snow-covered and frosted in all the right places.

The perfect backdrop, as you can see, for previous K&C Santas and other Christmas themed accessories.

Special Note: A few of our recent Santa Collections are still available grab’em while stocks last… especially XM018 The Sitting Santa… he looks great in that little cottage! 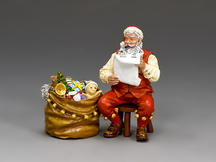 The presents are all packed, the heavily-laden ‘Santa Sacks’ are all loaded, onto his sled, the elves are enjoying a well-earned break and Santa is doing a final check of the addresses of all the good little boys and girls he will be visiting on his epic journey around the globe... A Wehrmacht officer shows his map to an NCO to find out where exactly the enemy is ... An RAF Police Dispatch Rider on a BSA Motorcycle. Once the Luftwaffe began attacking RAF airfields and other ground installations every kind of weapon was utilized in their defence.

Here, a .303 Bren Gun is on its AA mounting and ready to “have a go” at any low-flying German aircraft. Both RAF ground crew are wearing “08” pattern webbing (blancoed in RAF grey) and one also carries a .303 Lee Enfield. Perfect for “Napoleonics”... “WW1”... “WW2” you choose whatever battlefield or campaign works best for you. This two-storey, brick structure is typical of industrial-type buildings that were built from the mid-19th Century until the first quarter of the 20th Century and could be found all over Europe...East and West.

In a wartime scenario, either WW1 or WW2, buildings like this one were utilized for all kinds of purposes. K&C has provided you with 4 great suggestions and a sheet *of signs that could be attached permanently or temporarily to provide the perfect battlefield backdrop for both figures and fighting vehicles.

* The sheet includes signs and posters for the following:

Collectors, of course, can make up their own signage to fit this really useful building. 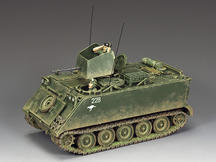 As Australia’s involvement in South Vietnam deepened the Army decided it must have a modern armoured personnel carrier that could more easily navigate through dense South East Asian jungles, paddy fields, rivers and creeks.

After exhaustive tests and trials in Australia’s own tropical rain forests the Army selected the American-made M113.

In March 1965 the first M113 A1’s arrived in Australia and by June of that same year some of these Aussie 113’s were deployed to South Vietnam.

Our K&C model is typical of these Australian APC’s that saw action at that time and in the following years. ’22 Bravo’ mounts a .50 caliber Browning machine gun on top of the commander’s hatch behind which sits the vehicle commander himself. A second figure appears just popping out of the open hatch of the driver’s position.

As you can see in our pictures the vehicle can also accommodate additional Australia infantrymen riding into battle. All of the different German armed services supplied bands and musicians to accompany their troops in the field. When not engaged in musical activities bandsmen often acted as stretcher bearers and assistants to the German military medical services.