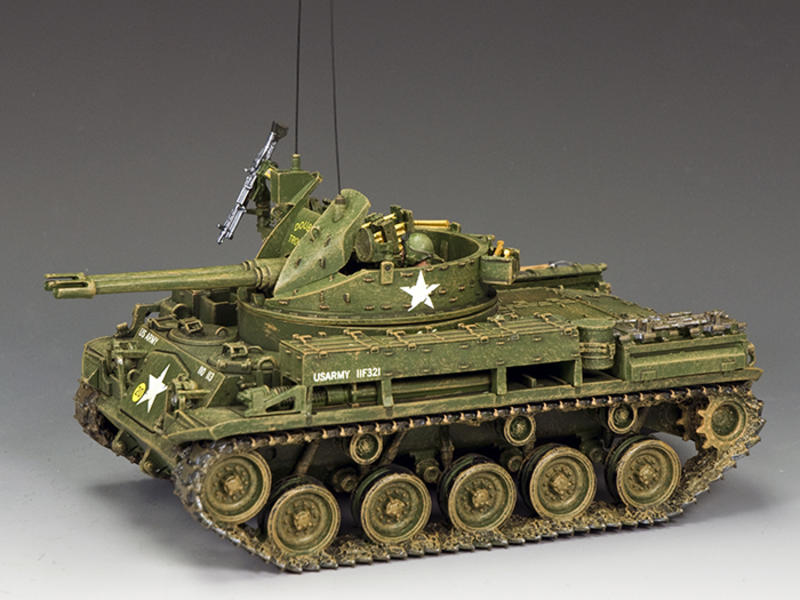 During the Korean War (1950-53) the U.S. Army decided it needed a mobile anti aircraft gun that could utilize the existing chassis of the M41 Tank. Since 40mm guns were seen as the most effective twin gun mounting, similar to those on most U.S. Navy ships of that era, they were ‘married’ to a M41 chassis and designated the M42. The first M42’s entered service in late 1953 with production halted in 1960 after some 3,700 vehicles had been produced. These in turn began to be replaced by the HAWK Surface to Air Missile units in the early 1960’s. By 1963 most ‘Dusters’ had been transferred to National Guard units... Until Vietnam! Our King & Country model, made up of over 95 separate parts, is typical of the U.S. Army “Dusters” of the late 1960’s period during the Vietnam War. Two seated Gunners man the twin 40mm ‘Bofors ’ guns and the vehicle also comes with double radio antennas and a side-mounted M60 machine gun. Painted in standard U.S. Army Olive Drab this particular M42 is nicknamed ‘Double Trouble’ and stands ready for action... anytime, anywhere.