This model, in high gloss black and silver finish has the Party Leader standing in the front seat passenger position giving his familiar straight-arm salute to the “Party Faithfull”. Based on several photographs taken in 1935 and 1936 he still wears the simple brown shirt uniform with his gold party badge and iron cross (First Class) on his breast. Seated next to him is his personal driver and close friend SS-Standartenfuhrer Julius Schrek who also joined the Nazi Party in 1920, about the same time as Hitler himself. The two developed a strong bond of friendship that continued to grow throughout the Party’s ascent to power. 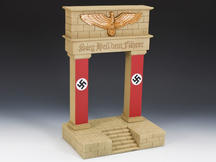 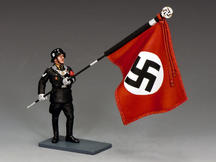