From our experience of over 30 years there is only one WW2 tank that comes close to rivalling the popularity of the German “TIGER” tank and that is...the American “SHERMAN”. Here is the latest addition to our K&C Sherman “stable”...An M4A3E8 “Easy-Eight” aptly-named “FURY”. We’ve based our model on the one that appeared in the recent movie of the same name that starred Brad Pitt as the tank Commander. As you can see this model is both “battle-worn” and full of character. Its tracks and wheels covered in mud there’s plenty of crew gear and supplies stowed all over the hull and turret as well as extra logs attached to the sides...just like real life...and the movie. Armed with the 76mm main gun our model comes with additional .30 cal. and .50 cal machine guns on top of the turret and a vehicle crewman in the open turret hatch. This vehicle also looks great with our previously released “Wardaddy” figure (DD262) standing alongside. 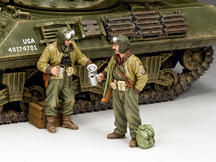 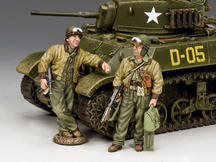 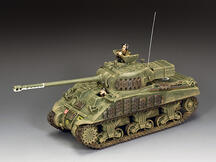