Guy of Gisbourne is one of the great villains from the Robin Hood legends of English folklore. A Norman Knight, he is a loyal henchman of the evil Prince John and the dastardly Sheriff of Nottingham. As such he is a sworn and dangerous enemy of Robin Hood. In movies and television he has been portrayed by many talented actors but perhaps the best was Basil Rathbone in the 1938 Errol Flynn “The Adventures of Robin Hood.” Our model is a small tribute to this great actor and a great movie. Special Note: Look out for more great “Robin Hood” figures (including the Sheriff’s Men-At-Arms) in the coming months. PLUS “Maid Marion” and “Alan-a-Dale” as well. 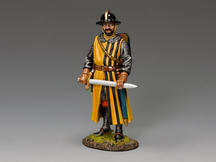 Sword-In-Hand, The Adventures of Robin Hood