This fictional Belgian detective, created by English author, Agatha Christie has appeared in more than 33 novels, several films and television series and on radio. He has been memorably portrayed by Albert Finney, Peter Ustinov, Orson Welles, David Suchet and most recently, Kenneth Branagh. And now he is immortalized in miniature by King & Country. As you see the dapper and fastidious M. Poirot stands confidently addressing his audience and obviously making a point of, perhaps, declaring who is the murderer or person behind the crime! 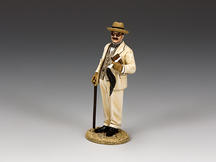