Hermann Graf (1912-1988) served on both the Eastern and Western Fronts during WWII. He became the first pilot in aviation history to claim 200 aerial victories – that is, 200 aerial combat encounters that resulted in the destruction of 200 enemy aircraft. Graf, a prewar soccer player joined the Luftwaffe in 1936. He was initially selected for transport aviation, flying the legendary Junkers 52 before volunteering and being chosen to join the famous Jagdgeschwader 51 (JG51) in May 1939, just 4 months before the invasion of Poland and the outbreak of the Second World War. During the so-called ‘Phoney War’ of late 1939 and early 1940 he was stationed on the Franco-German border flying uneventful patrols. He was then posted as a flight instructor to Romania in order to help train that country’s small air force. At the end of this period he even saw a little action in the closing days of the German invasion of Greece at the end of May 1941. After the beginning of ‘Operation Barbarossa’, the Nazi invasion of the Soviet Union, Graf finally claimed his first ‘kill’ in August 1941. 45 victories later Hermann Graf was awarded the prestigious Knights Cross of The Iron Cross in January 1942. By September of that same year his victory score had risen to an incredible 172 for which his honour was upgraded to the Knight’s Cross with Oak Leaves, Swords and Diamonds! At the time of this presentation this was Nazi Germany’s highest military decoration. On 26 September 1942 he shot down his 200th enemy plane. Now, a national hero he was withdrawn from combat flying and posted, once more, to a fighter pilot training school. In November 1943, as British and American bombers and fighters continued to build up their aerial assaults on the Third Reich, Graf, once more returned to combat operations and was appointed Geschwaderkommodore (Wing Commander) of JG11 of the 11th Fighter Wing. It was with this unit that Hermann Graf scored his 212th and final aerial victory on 29 March 1944. He was severely injured during that final encounter and spent many months recuperating before taking over command of JG52 in early 1945. He remained in charge of JG52 until Germany’s surrender on 8 May, 1945. Although Graf and his men surrendered to the Americans he and his men were then handed over to the Russians. Hermann Graf continued in Soviet captivity until 1949. After his return to Germany Graf lived a fairly quiet life and died in his home town of Engen on 4 November, 1988. ABOUT THE K&C MODEL Of all the many aircraft Hermann Graf flew his personal favorite was Willy Messerschmitt’s Bf.109 ‘Gustav’. Graf himself stated that the ‘Gustav’ was the best fighter aircraft he ever flew even after flying captured British ‘Spitfires’ and American ‘Mustangs’. Our K&C model depicts just one of several ‘Gustavs’ that Hermann Graf flew during the middle part of the war. It is easily recognized by the red ‘tulip’ nose and the white tail complete with ‘kill’ markings and his Knight’s Cross award. This model also has a canopy that can open and close. Each aircraft comes in a specially-designed box with a spectacular cover painting and a free full-colour print by noted Australian artist, Ian Hill plus an information card on Graf himself. Just 300 of this very Special Edition Hermann Graf Bf. 109 ‘Gustav’ are being released. 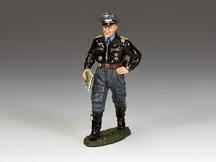