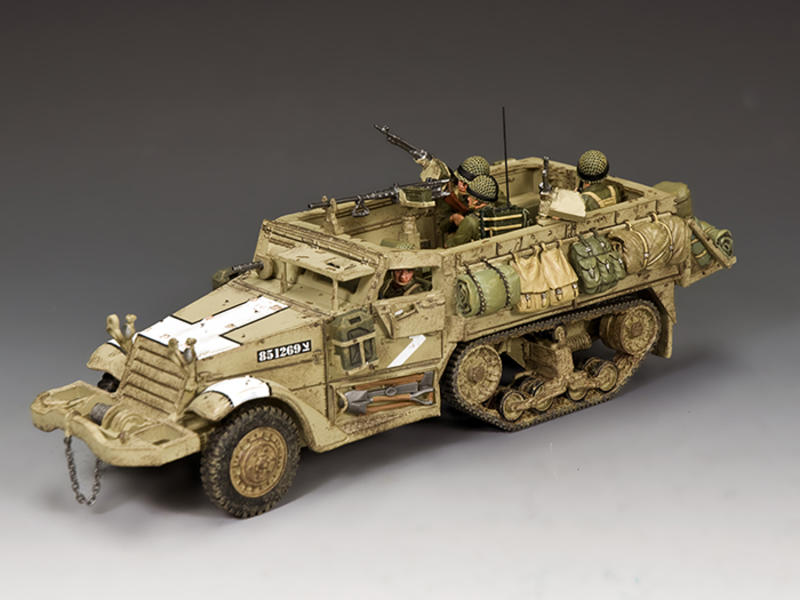 These sturdy and reliable vehicles were the ‘workhorses’ of the mobile Israeli infantry during the SIX-DAY WAR and for years afterwards. In 1967 the majority of Israel’s M3’s came from French Army surplus stocks which in turn had been supplied from US Army surplus stocks after WW2. The Israelis then dismantled them, re-engined them, added additional armour and ‘up-gunned’ them. This new K&C model is one such example... and armed to the teeth! On both sides of the vehicle are mounted Belgian-made FN General Purpose Machine Guns firing a 7.62mm round, the same as the combat rifles used by the Israelis at that time. Upfront of the vehicle is the pole-mounted Browning .50 cal. Heavy Machine Gun together with a .30 cal. Light Machine Gun sighted next to the driver in the passenger position. Other Israeli M3’s mounted 81mm mortars and even 20mm cannon... Around our vehicle are all kinds of stowage items allowing more space for soldiers riding in the back of the M3. In this model we include a seated driver and three sitting Paratroopers (including a radio operator). The model itself also sports the broad, black edged, white air recognition stripe found on all Israeli fighting vehicles of this era. This is a welcome addition to K&C’s previously released M4 ‘Isherman’ tank (IDF002) and the more recent M38 Jeep with the recoilless rifle (IDF017).