This kneeling firing Fallschirmjager is using the FG42 select fire Mauser automatic rifle developed specificably for the airborne infantry. It combined the characteristics and firepower of a light machine gun in a lightweight form and was slightly shorter in length. Considered as one of the most advanced infantry designs of WW2 it was however expensive to produce and only had limited production from its introduction in 1942 until the end of the war. That being said many of its best features influenced other post war small arms development particularly the US made M60 Machine Gun. 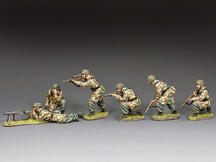