A “Legatus” (anglicized as Legate) was a General of the Roman Army equivalent to a modern general officer. Being of Senatorial rank, his immediate superior was a Proconsul (provincial governor). The Legate outranked all Military Tribunes and was usually appointed by the Emperor himself. The rank carried great prestige and was much sought after by Rome’s noblest families. In provinces with only one Legion the Legate might also be the provincial governor. In the field the Legate could be distinguished by his elaborate helmet and body armour. Our K&C Legate is mounted on a black arab stallion and carries his own purple crested helmet. 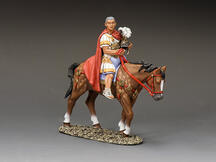