“Trooper” in the cavalry is the equivalent of a “Private” in the infantry and the lowest entry rank to the regiment. All mounted troopers have already completed 14 weeks of basic training before moving onto a further 12 weeks of specific military skill training. For those joining the ceremonial squadrons (cavalry regiments have squadrons, the infantry equivalent is the rifle company) a 12 week “Khaki Ride” which includes stable management, horsemanship and basic riding skills will be taught at Windsor, near London. Then the graduate moves to Hyde Park Barracks in the capital where they will learn to ride wearing the colourful ceremonial uniforms that generations of Household Cavalrymen have worn. Fully trained troopers can expect to spend 18-24 months taking part in traditional daily duties on Horse Guards Parade and Whitehall as well as numerous State Ceremonial occasions throughout the year. 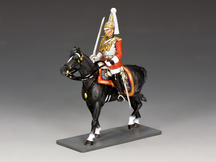