When Lieut. Colonel John Frost of 2 Para was seriously wounded at the Arnhem bridge on 20 September 1944 he handed over command of his battalion to “Freddie” Gough, the unit’s senior major. Major Gough was taken prisoner with the rost of 2 Para when their position was overrun but managed later to escape German captivity in April 1945 and join up with American forces in Bavaria. After the war he became a successful Member of Parliament and lived to see himself portrayed in the movie epic of the Arnhem battle, “A Bridge Too Far”. 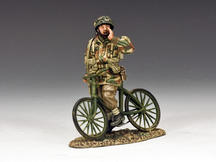