Jack Churchill (1906-1996) was no relation to the more famous Winston but shared the same spirit and thirst for danger and excitement. Originally commissioned into the British Army in 1926 he left the Army 10 years later before rejoining at the outbreak of war in 1939. After the Fall of France in 1940 he joined the newly-formed “Commandos” and rose, by 1942 to be second-in-command of No.3 Commando...A brave and energetic officer he was also a certified military eccentric...playing the bagpipes...using a bow and arrow in combat...and carrying a basket hilted Scottish broadsword into battle!!! He finished the war as a Lieutenant Colonel and was awarded 2 x Distinguished Service Orders. He finally retired from the army in 1959. Here we show him carrying his “Tommy Gun” in one hand...and his famous Scottish Broadsword in the other. 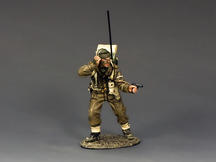