This time we selected one of the most famous Royal Auxiliary Air Force Spitfires to portray – a Spit belonging to No.602 “City of Glasgow” R. Aux. A.F. flown by Squadron Leader “Sandy” Johnstone, who became an “ace” during the battle and went on to have a very distinguished air force career in the remainder of the war and afterwards. We also chose “602” and “Sandy” Johnstone for personal reasons…Many moons ago – 1962 to be exact, both Gordon and myself lived right next to Royal Naval Air Station “Sanderling”. Today it’s now Glasgow’s international airport. Back then it was a military air-field and every year they held a NAVY DAY AIR SHOW. In 1962 the Guest of Honor was Air Vice-Marshall “Sandy” Johnstone and we two small boys actually met him and got his autograph!!! K&C is proud to honor this great pilot and the aircraft he flew to help protect our country during its darkest days.

Notice: Just 250 of this special “Sandy” Johnstone, 602 Squadron Spitfire have been produced. 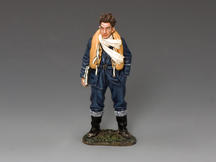