Joachim von Ribbentrop was Nazi Germany’s infamous Foreign Minister from 1938-1945. Before that he was a successful businessman and appointed German Ambassador to London in 1936. Many senior Nazi Party Leaders were given an “Honorary” rank in the SS by Reichsfuhrer Himmler himself. Foreign Minister von Ribbentrop was one such individual. It is said he took great pride in wearing the black uniform alongwith the medals he had won during the First World War and those awarded to him by the Nazi Party itself. He was one of the principal defendants at the Nuremburg War Crimes Tribunal in 1946...found guilty and subsequently hanged. 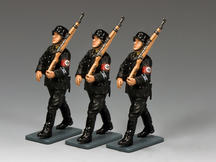