While in the midst of getting everything ready for Chicago... TWO beautiful C47’s flew into Hong Kong this morning. Both are for one of our major airborne / WW2 collectors and destined for an airfield display somewhere in China. While we had them it was just too tempting to set up a little scene with some of our now-retired US paratroopers.
Hope you like it! 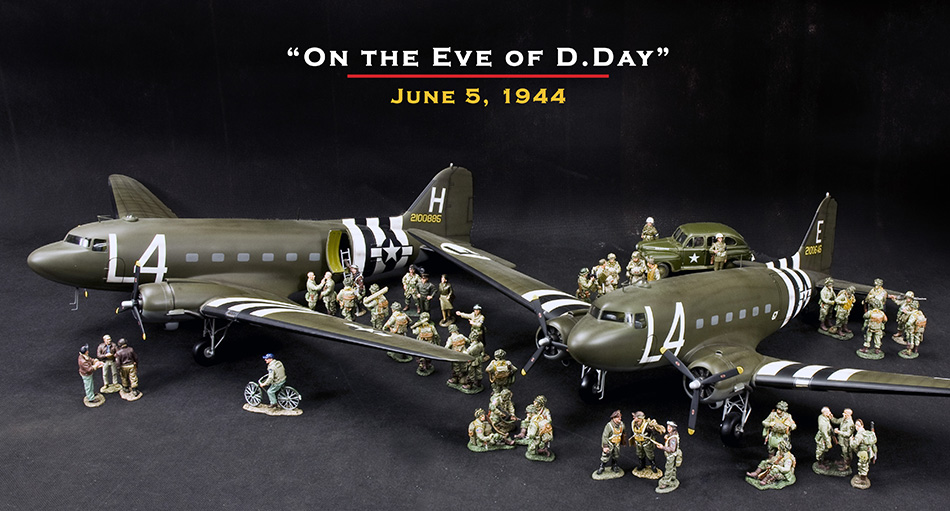 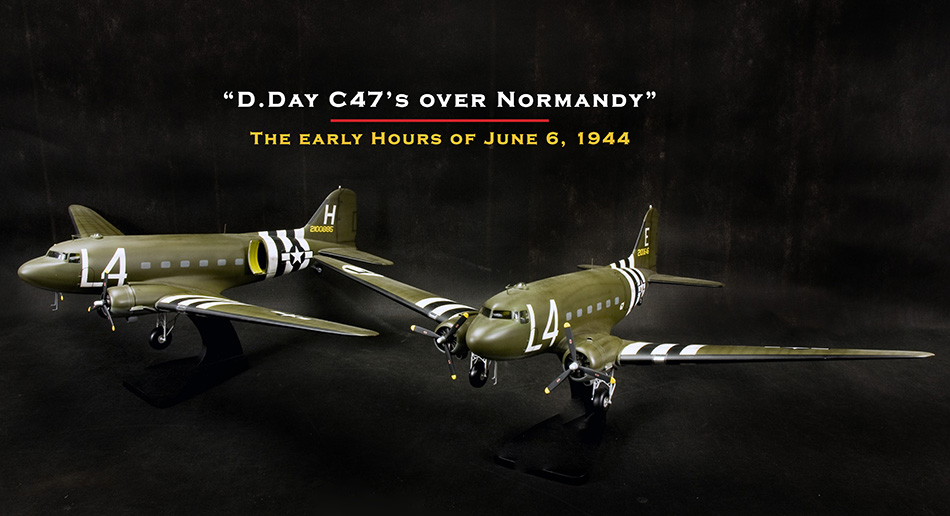 I often get asked by other collectors, “Andy, what are your favorite K&C soldiers?”
It’s a tough question to answer as obviously, I like all of them BUT in recent years I’ve found myself being drawn to some post WW2 conflicts.
Back in 2017 we launched our Israeli Defence Force series built around the 50th Anniversary of the June 6 Day War.
I had so much fun and enjoyment researching and discovering more about this particular war and the IDF who won it. I also believe that these miniature Israelis are among the very best creative and realistic soldiers and fighting vehicles K&C has ever produced!
They also led us into “VIETNAM” but that’s another whole story… and a very exciting one too.
In the meantime here’s a little peek at a dio that’s going to Chicago… by way of Cairo. 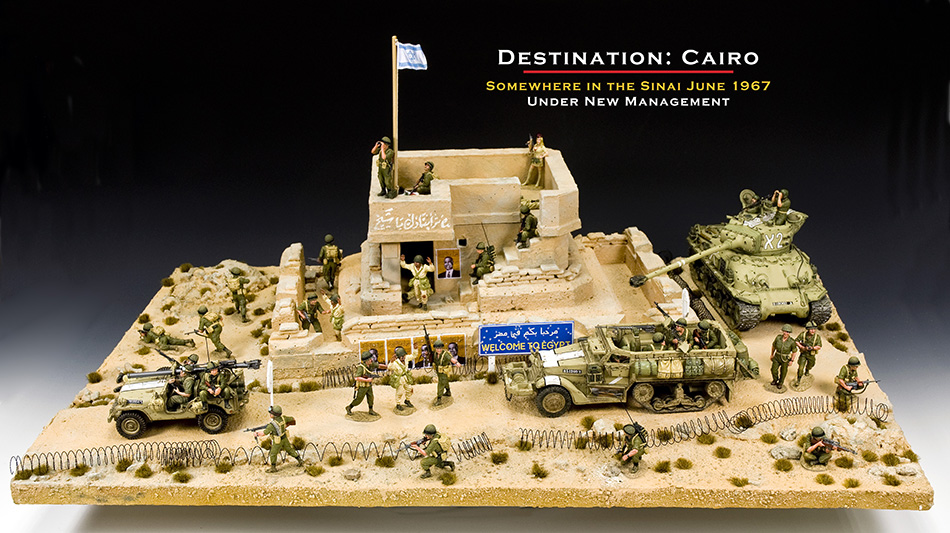 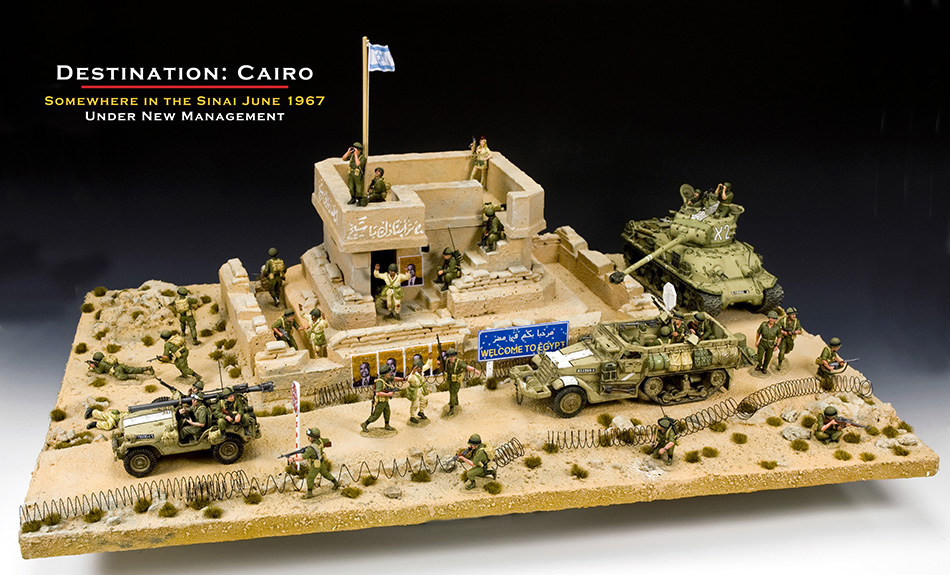 As September approaches here at K&C we are putting the final touches to the displays and dioramas we will be taking to the Chicago Show this year.
Here is one of the smaller displays, just 21” X 21” that will be featuring a ‘Battle of the Bulge’ theme for this the 75th Anniversary.
In this particular version of the scene we are featuring all of our currently available ‘BoB’ GI’s and vehicles together with some vintage additions of some earlier, now-retired pieces. At the show itself we will preview samples of the 3 x upcoming three-man ‘winter’ GI’s in action sets on display.
P.S. It was fun ‘winterizing’ the K&C buildings and making the occasional Belgian adaptation.
It’s also good to see what you can create in a relatively small space.
P.P.S. The idea behind this little vignette was borrowed and adopted from young Lee, one of our K&C collectors in Brisbane who I met during the recent ‘OzTour’ down under.
Thankyou Lee! 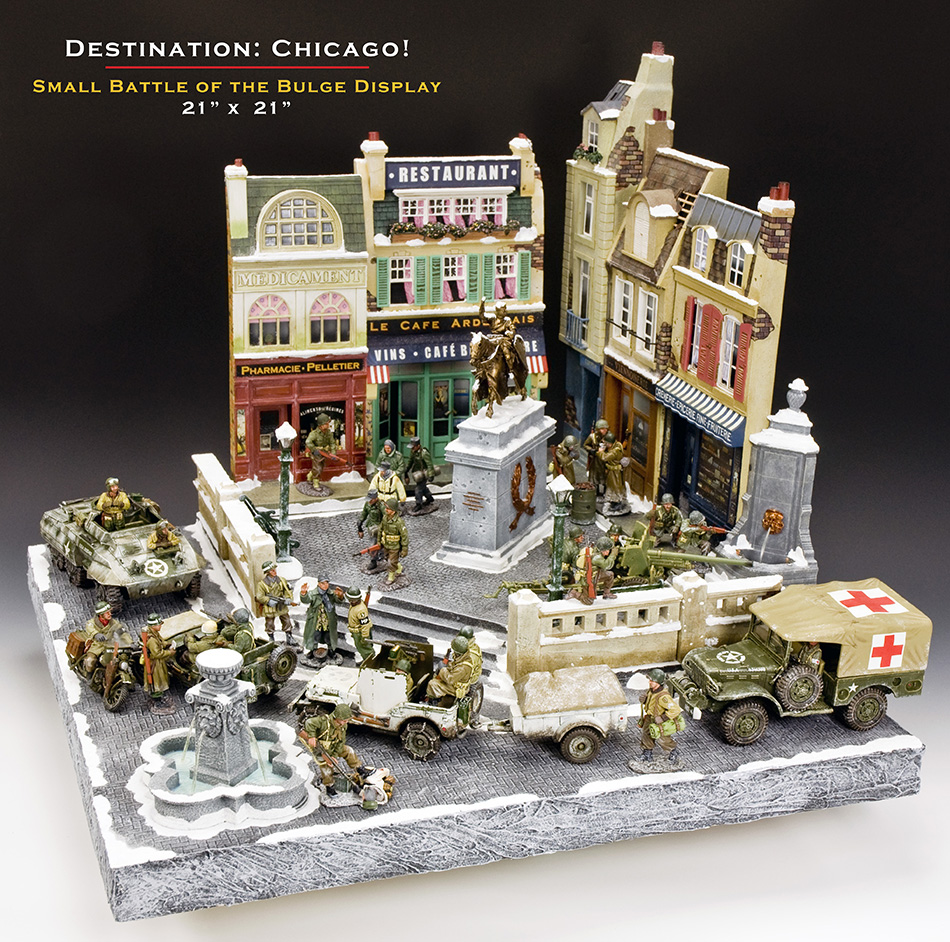 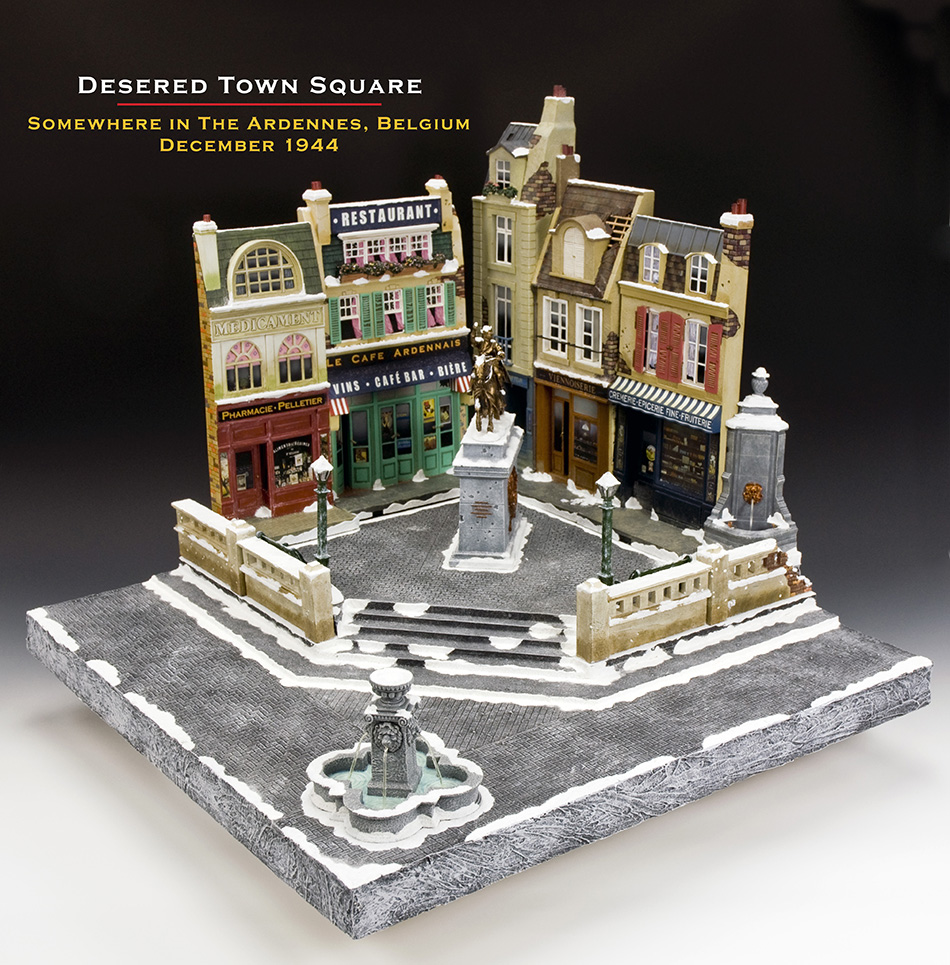 If one Centurion looks good... TWO look even better! At least that’s my theory, the more the merrier. After my recent ‘Oz Tour’ quite a few of my Antipodean cousins seem to feel the same way. All the best and happy collecting! 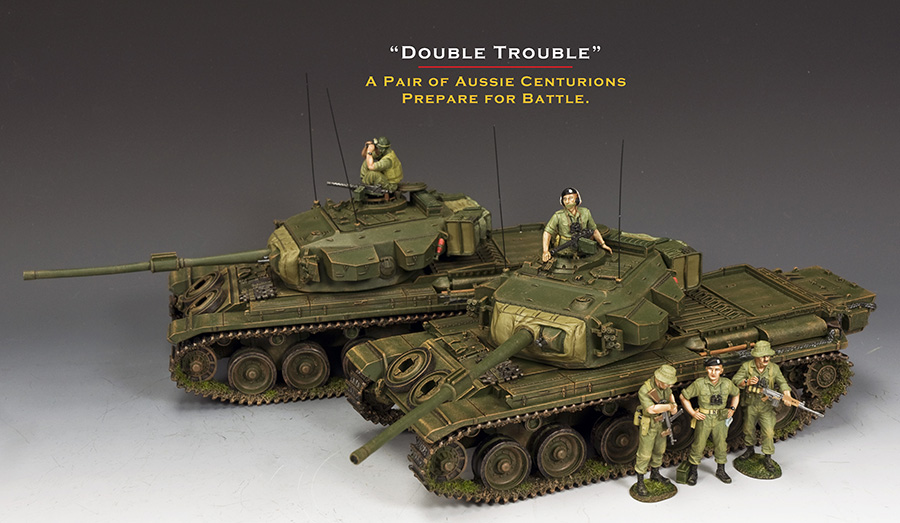 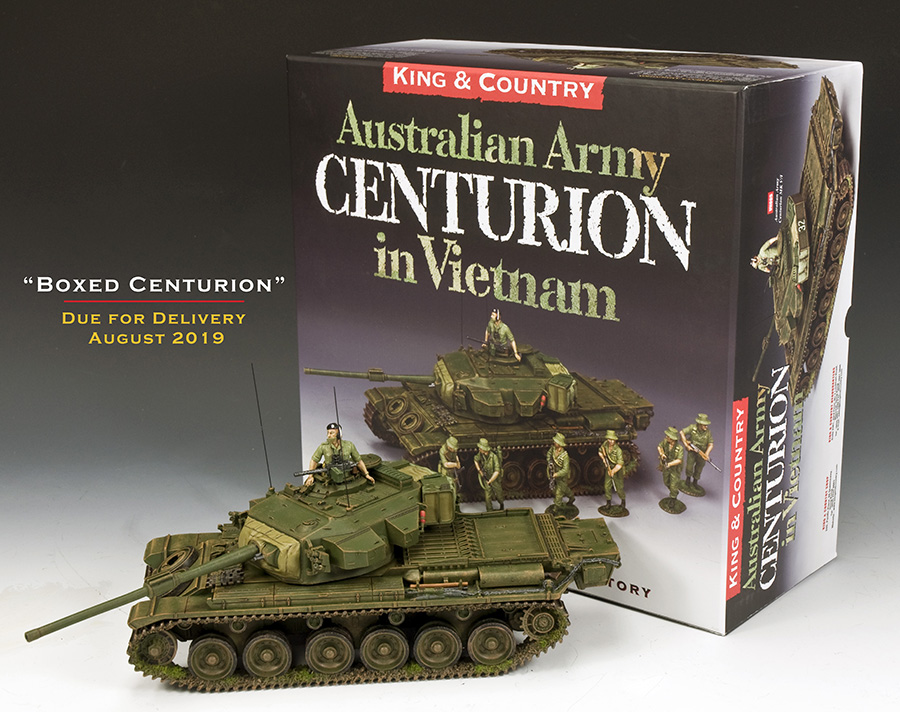 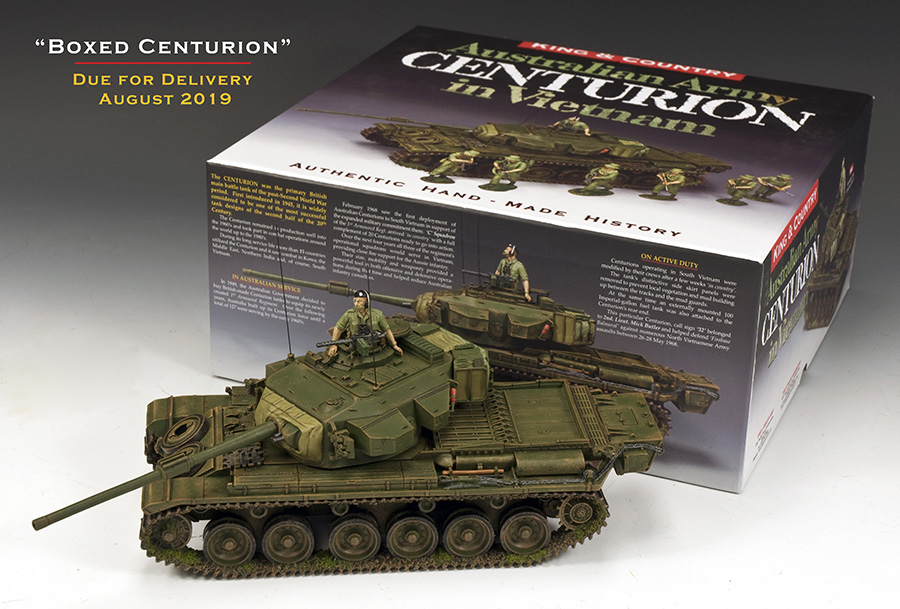 Attack on the Ouistreham Casino

Here’s a ‘sneak preview’ of just a small part of a much larger D.DAY diorama K&C are producing that will be on show at the Chicago Show in late September. Yours truly built the Casino.

Also being previewed are a selection of French Commandos led by Commandant Philip Keiffer which will be released around the same time as Chicago. 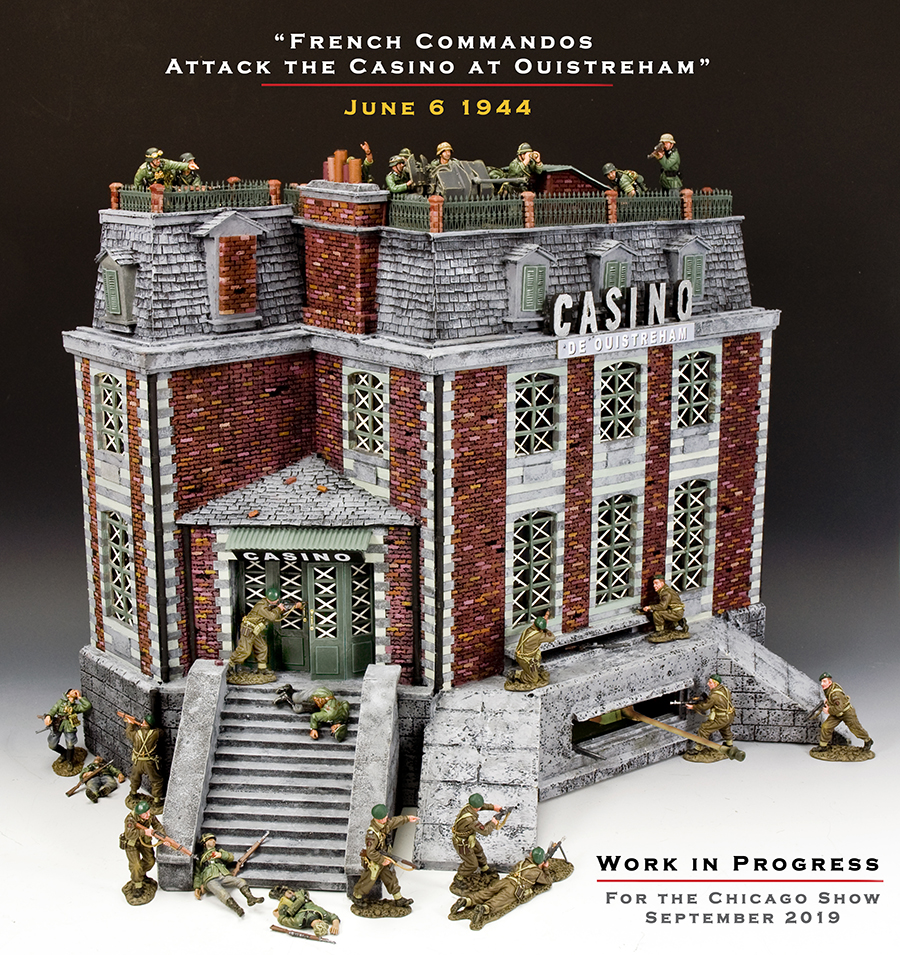 Here’s a preview of the THREE Vignette Displays that will be won by THREE lucky K&C collectors at our Friday Evening Event at the K&C Pacific Place Shop in Hong Kong this coming Friday.

As you can see there is a ‘Desert / Landscape... Part of a Napoleonic Gun Emplacement and... a little French Road.

All are very ‘adaptable’ and can be used in a wide variety of different scenes and scenarios. Enjoy! 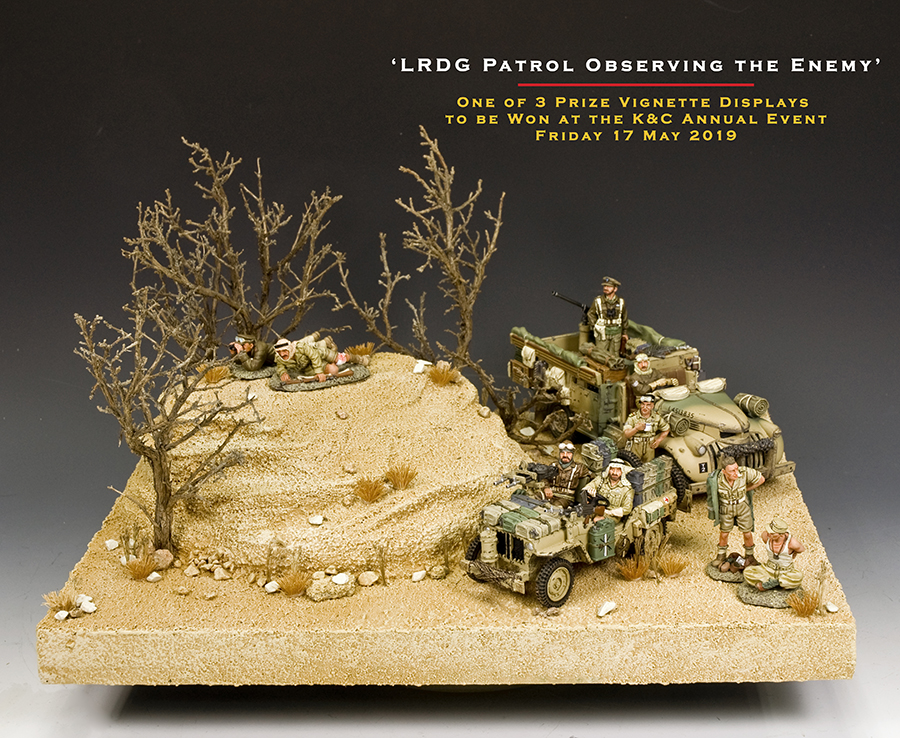 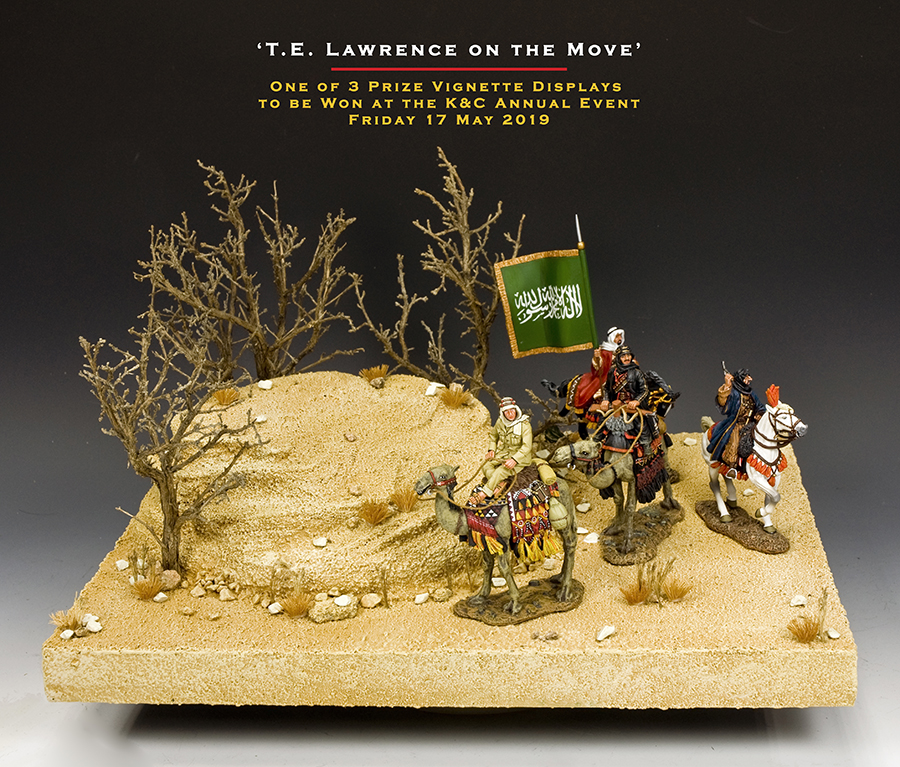 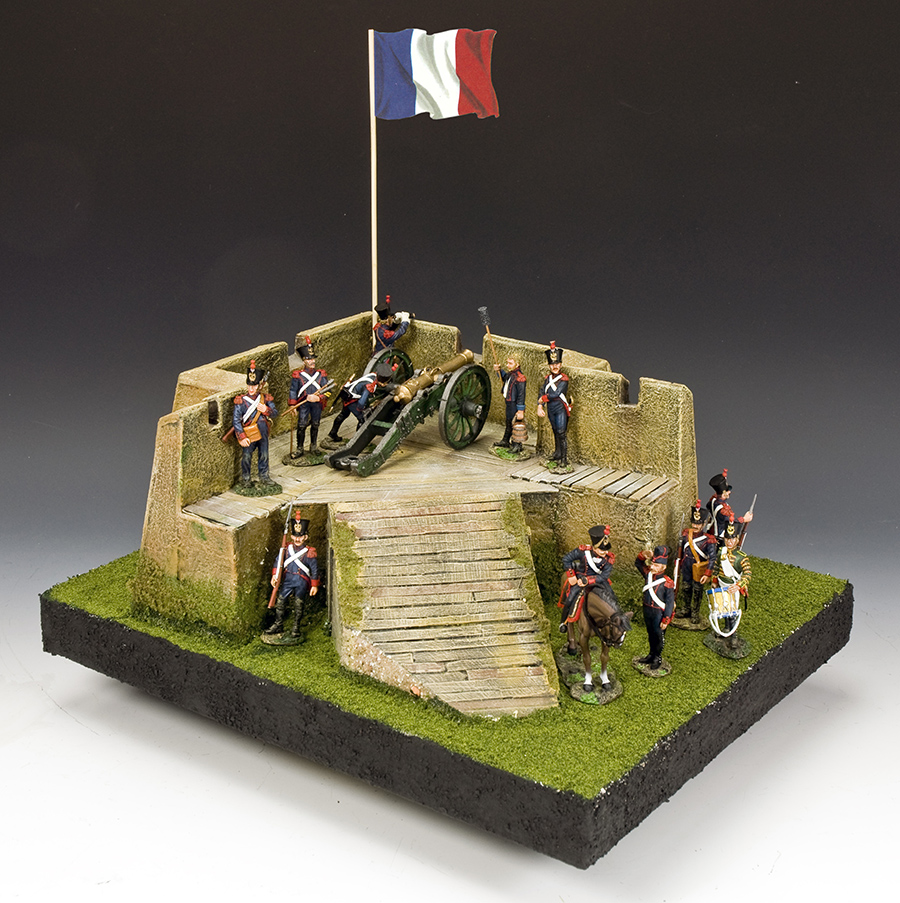 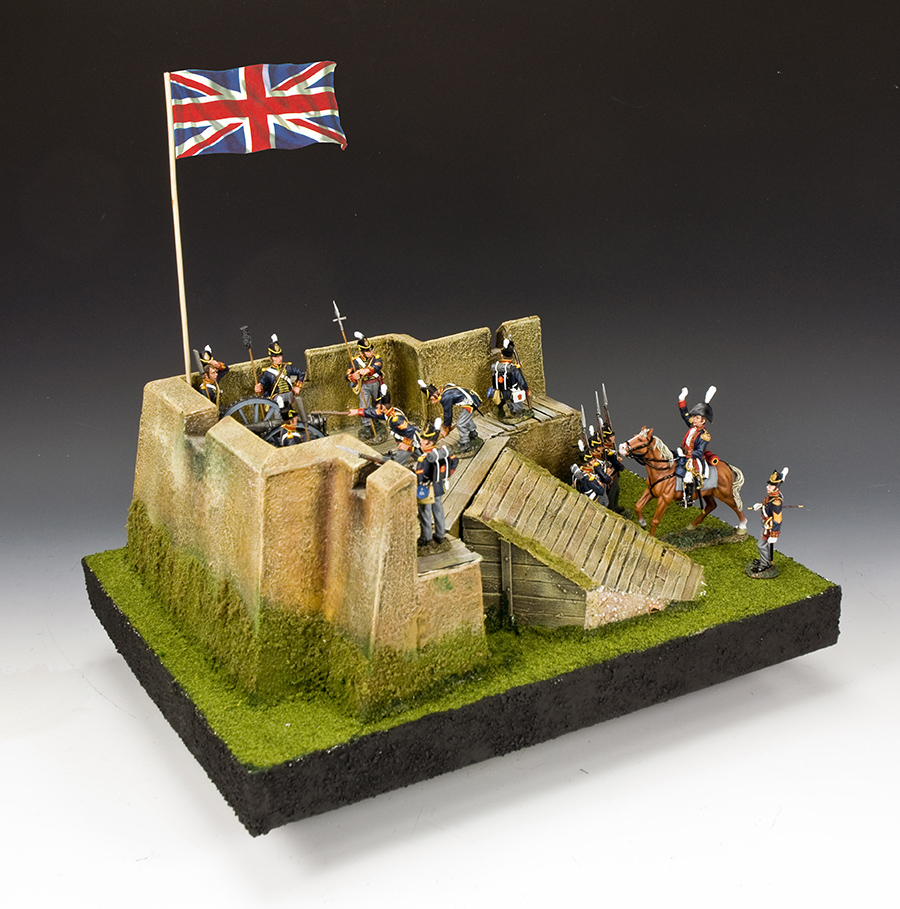 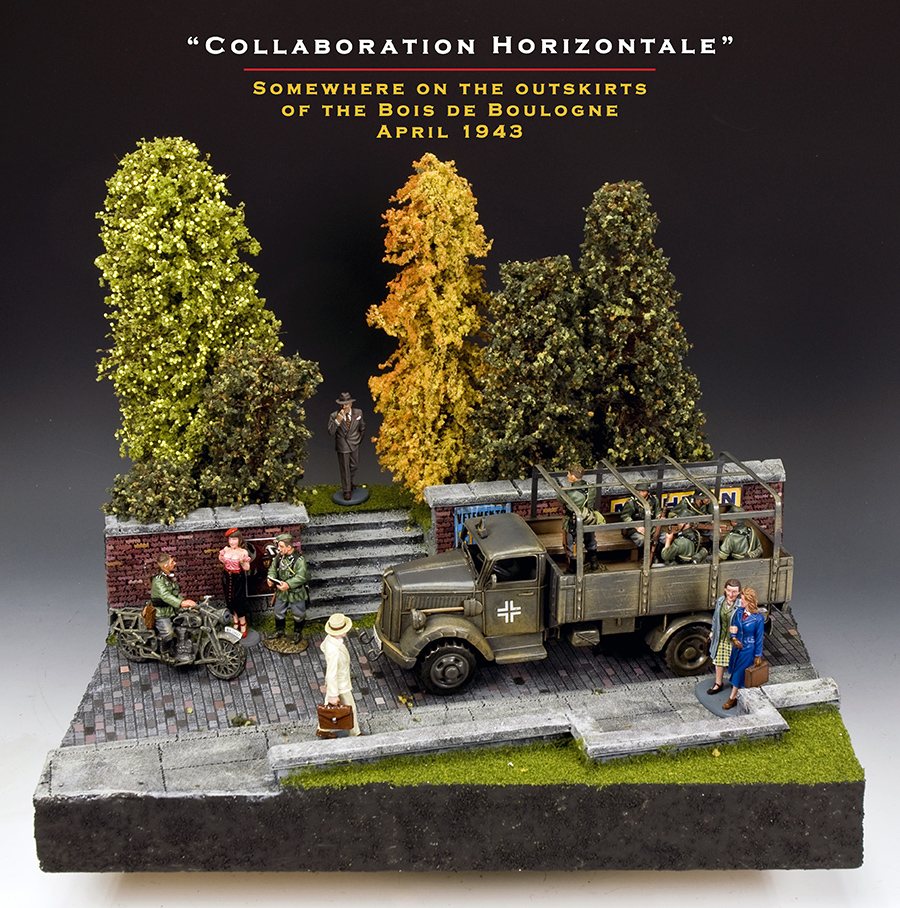 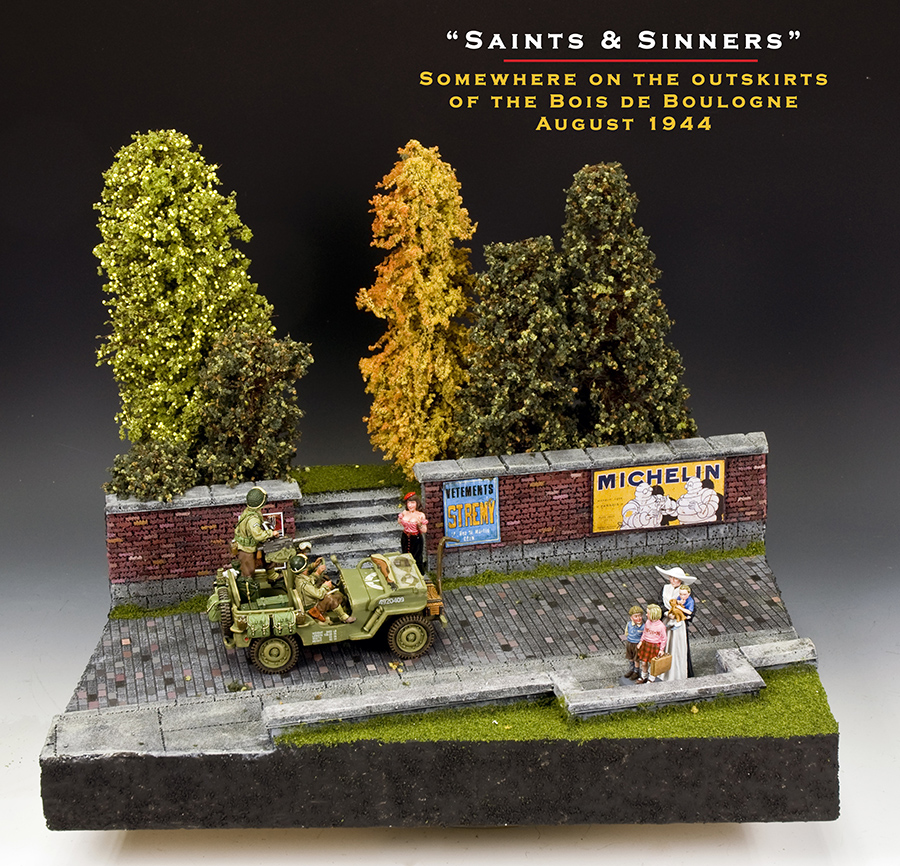 Here’s King & Country Toy Soldiers latest 'With the Marines' display featuring our ‘Vietnam Marines’... It measures 4’ x 2’ and shows off virtually all of our ‘Grunts’ and a couple of upcoming figures... Enjoy! 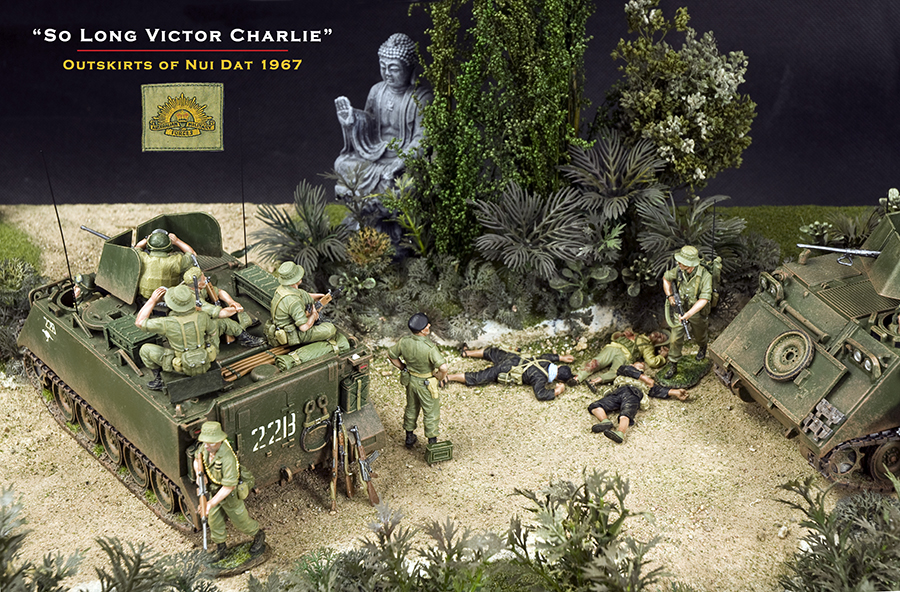 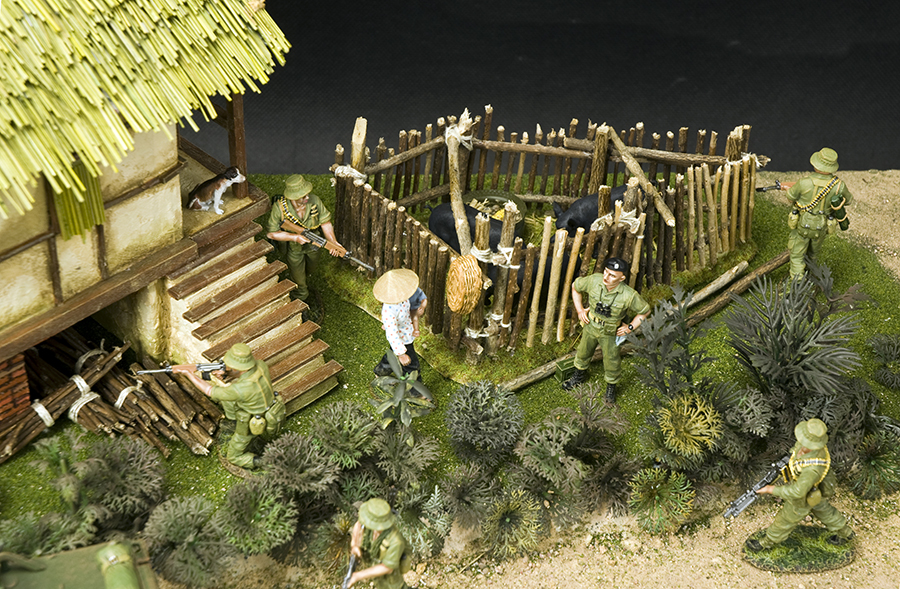 Next month, April, will see the release of possibly the biggest and certainly the longest military vehicle King & Country has ever produced... The Diamond T Tank Transporter.

Measuring almost 24 inches in length (about 60cm) this is the first of, what I hope will be, an occasional and special range of larger military models.

For a very long time K&C and yours truly have been thinking about and planning the Diamond T and finally it’s almost here.

The tractor and trailer are combined in a special box complete with 4 page full colour leaflet.

Also I hope to show a ‘desert’ version in the not too distant future. 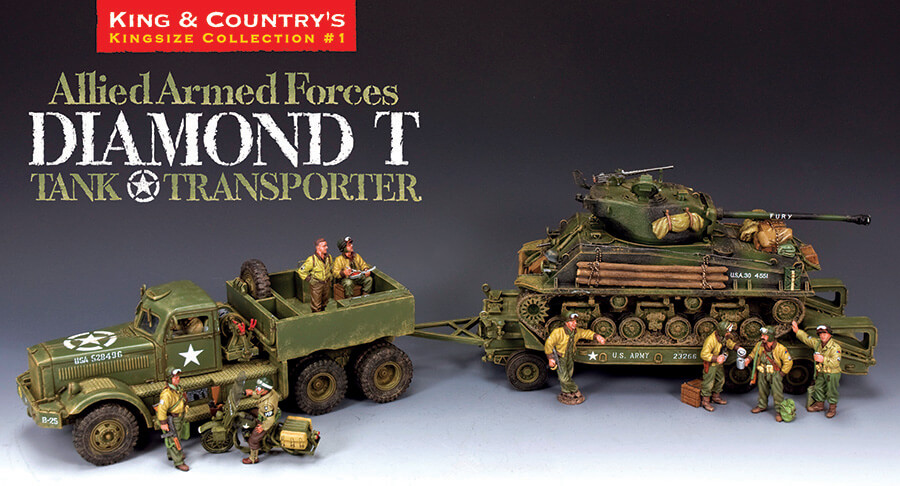 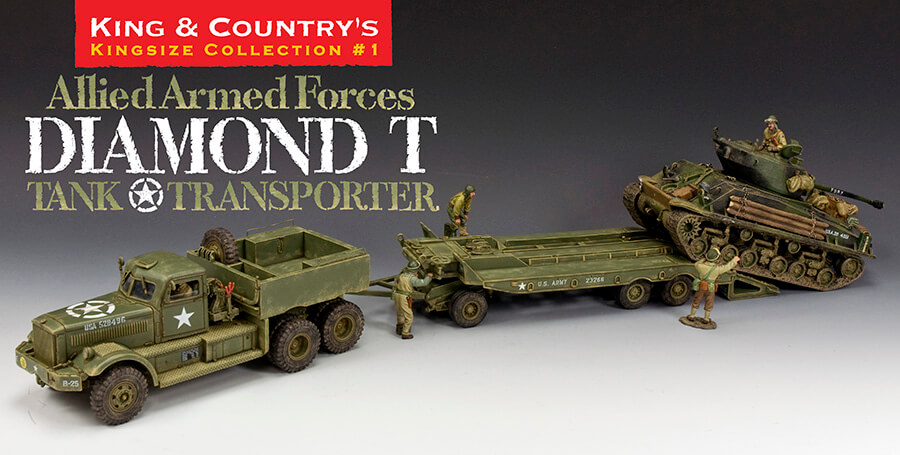 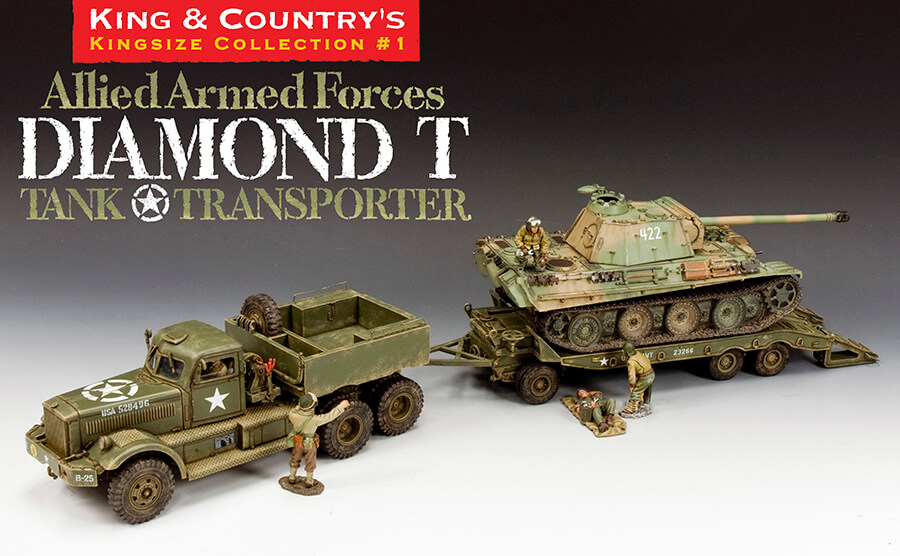 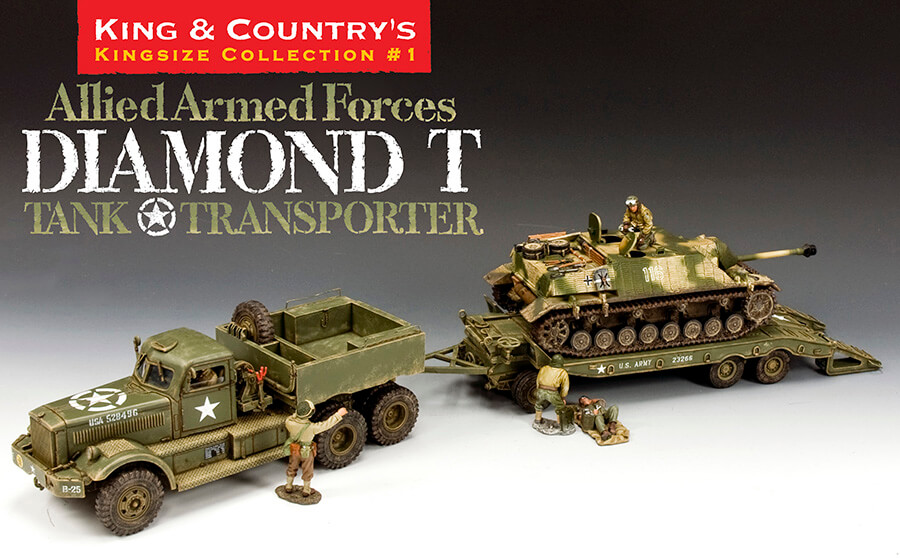 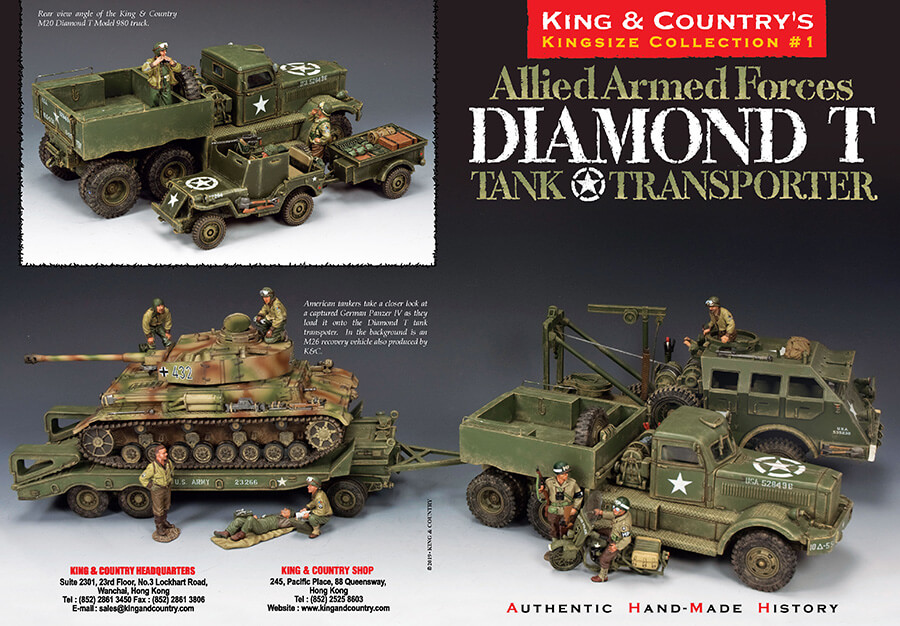 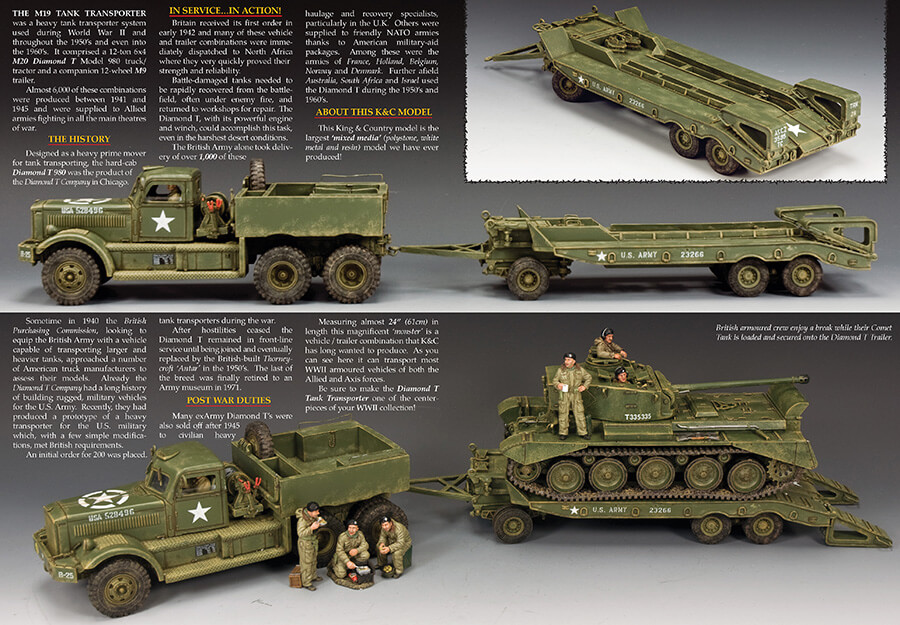 On The Road To Nuremberg

Here is one of our older dioramas which we have relocated to somewhere on the outskirts of Nuremberg as some of the ‘Party Faithful’ make their way to the rally grounds for their big day.
Leading the parade are a group of RAD (Reichsarbeitsdients), the Reich Labour Service... smartly polished shovels over their shoulder as they march past.
Making up the ‘onlookers’ are some old and new figures.
Filming the K&C march past is Leni Reifenstahl and two of her cameramen.
Hope you like it! 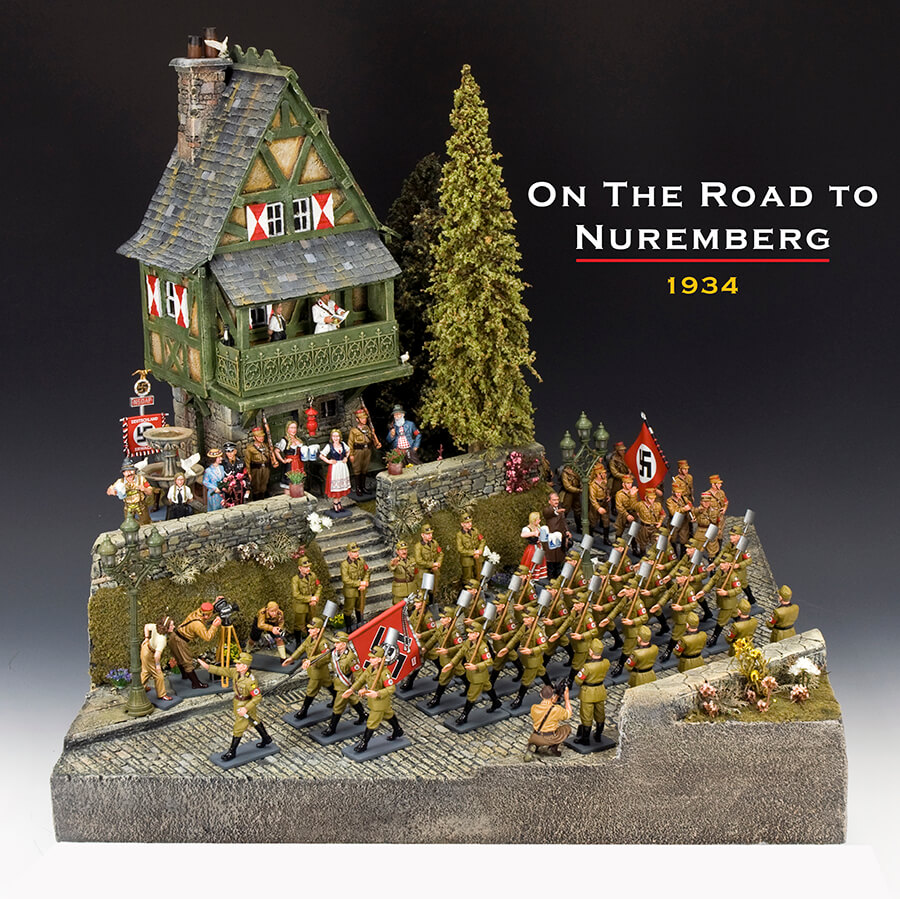 An Encounter With The Emperor

Earlier we showed you this little display with a WW2 theme. Well, here is the same display with Napoleonic figures... Change of historical period helps tell a different story.

And that is one of the great, fun things about building displays... or at least some of them... and treating them like an old-time movie set that can be played with time and time again... 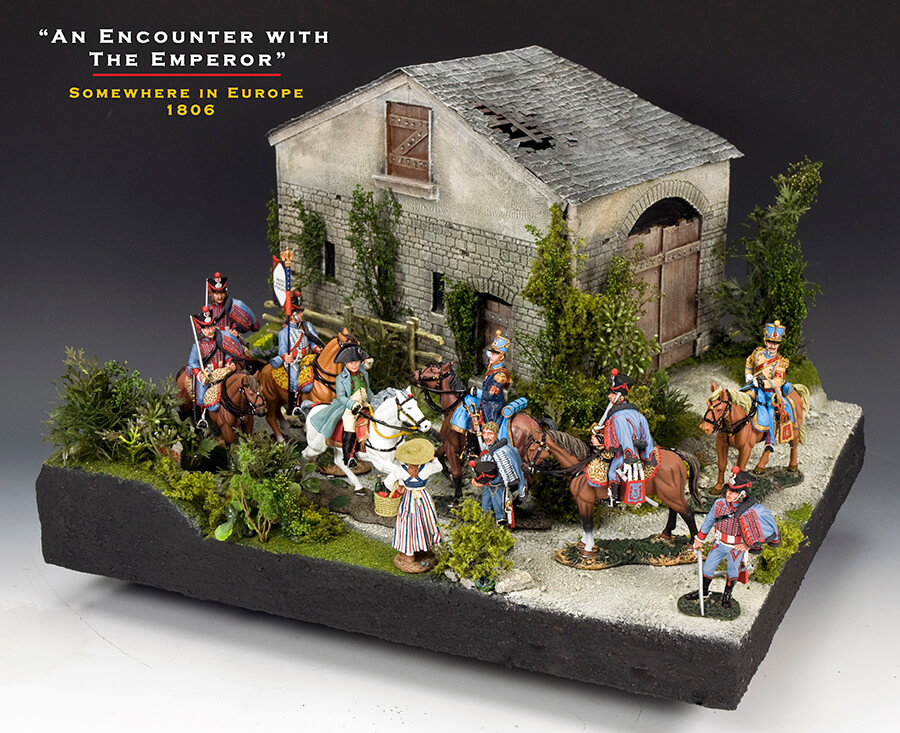