Jeeps On The Move

We just finished a small 12"X15" dio / display panel for one of our collectors.

So, as usual we decided to try a couple of different 'setups' to show off some figures, vehicles and other items. 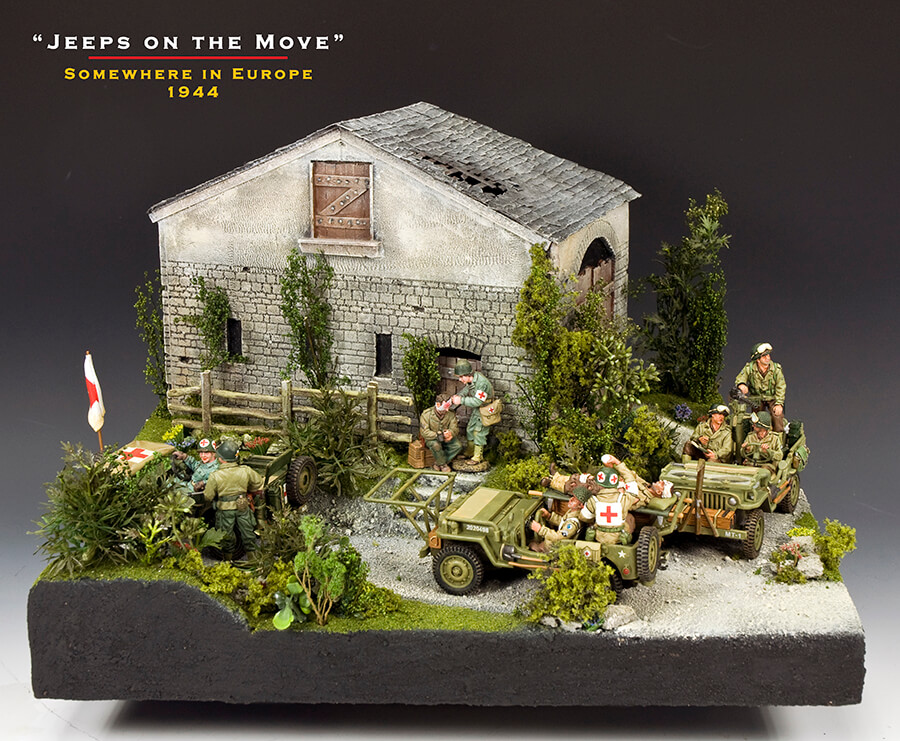 This ‘revised’ Hue Citadel diorama is going to one of K&C’s UK collectors early next week… He requested even more battle damage than the last photos you saw and we have complied with his wishes as you can see.
But first it will appear at the London Show this coming Saturday complete with a Huey helicopter too!
look forward to seeing some of you guys there. 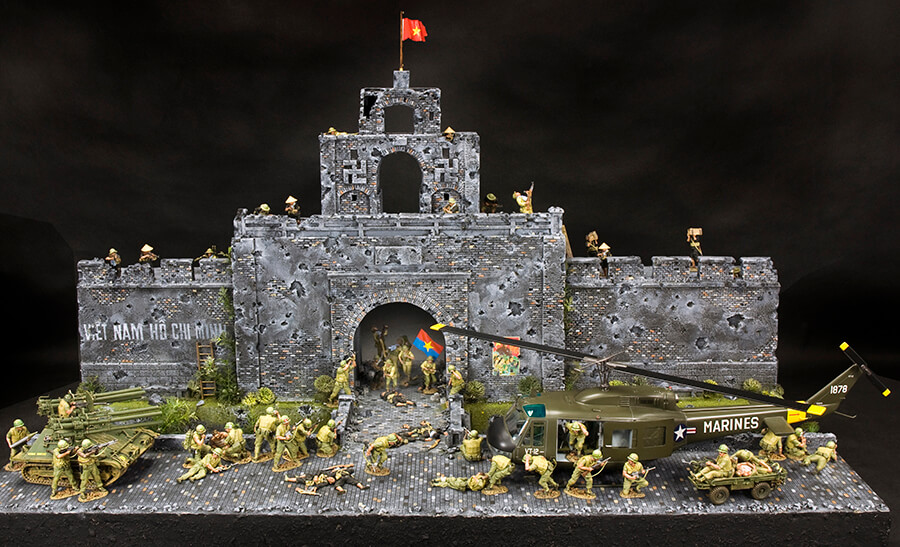 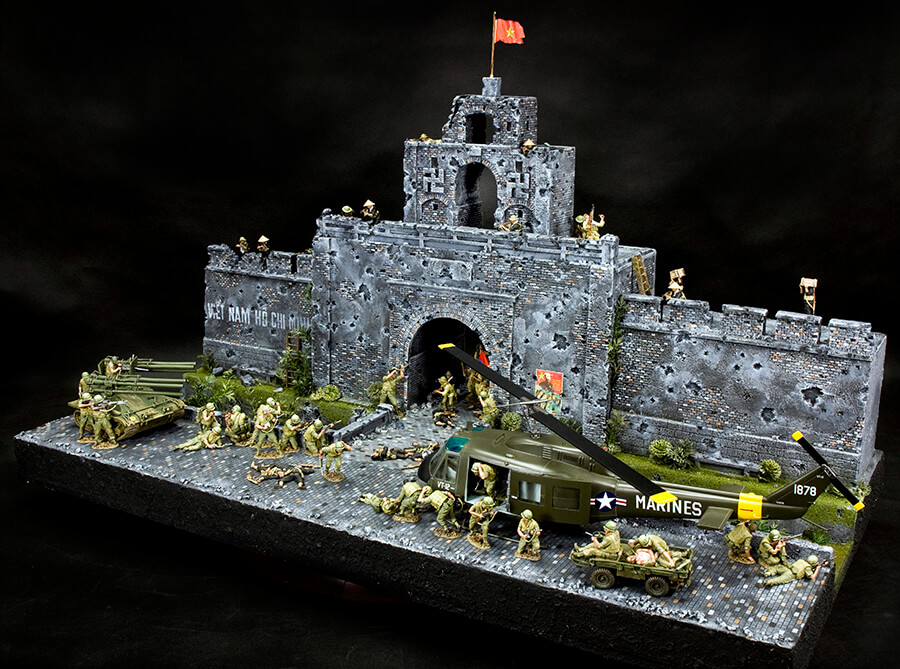 As you know we usually show our Pacific War scenes as the battle rages...

What, we thought, might it look like after the bullets have stopped flying and peace has descended on the scene.

Here, the battle has moved elsewhere and its time to gather in the few prisoners, check the enemy casualties and mourn one of our own... We don’t know if it did happen but we are pretty sure it should have happened... Before heading into the ‘boonies’ for the first time in South Vietnam most troops would have had the opportunity to go ‘on exercise’ to practice their bushcraft and basic infantry skills in a real jungle setting without drawing the undue attention of all those pesky little guys and gals in the trendy black pajamas!

So, here we see part of an Australian infantry unit navigating a jungle river and moving tactically through the bush. Hope you like it...

The actual dio measures just 12”x 15”... It’s amazing what you can pack into a relatively small area. This was a joint effort by Andy and Gordon. 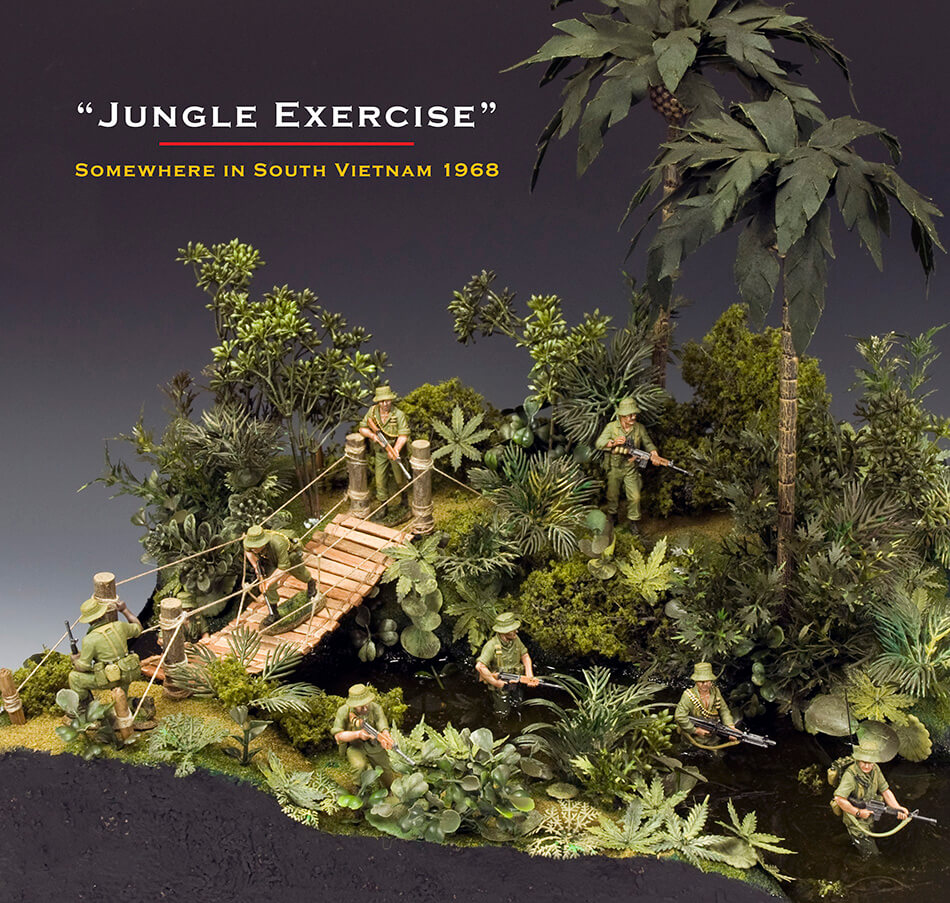 Here is a compact little (actually not so little) diorama (24”x20”) which we designed and had built for one of our very good collectors. The gentleman concerned wanted a “Normandy Street Scene” circa June 1944 and we were very happy to comply. Our friend David Marshall did all the basic construction from our drawings and design then Gordon and yours truly added some additional detail and touches. 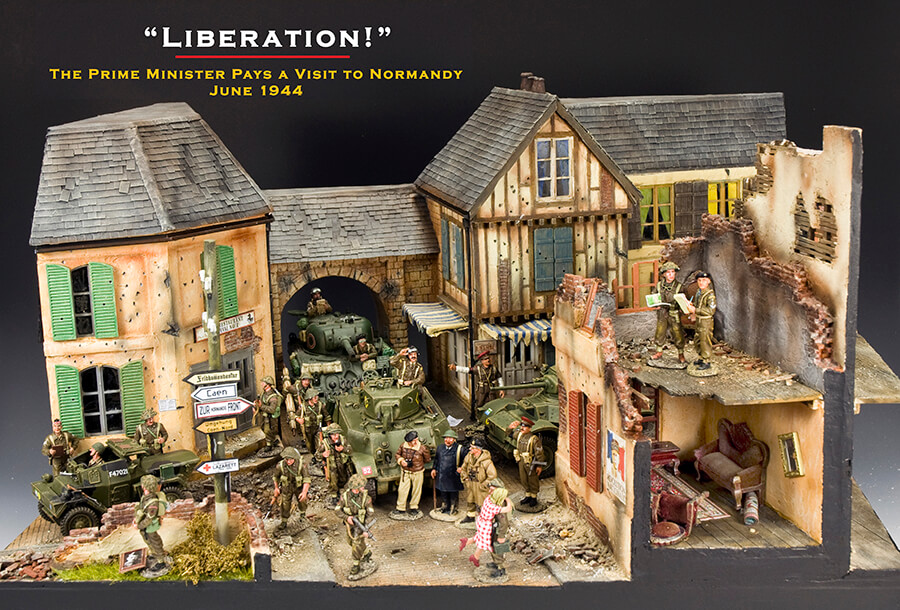 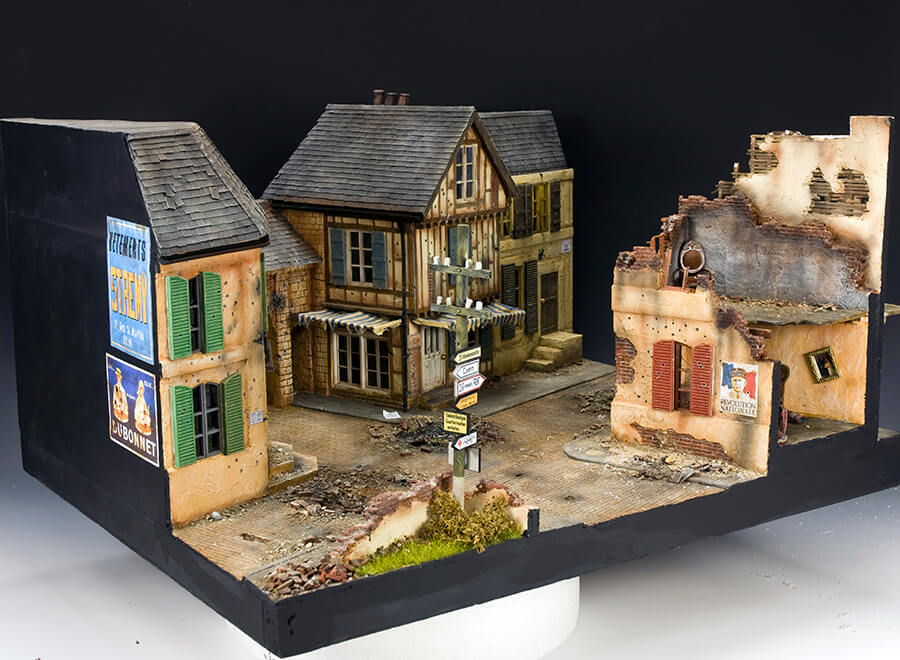 This 12" X 15" jungle diorama built by K&C's own Gordon C. Neilson is perfect for displaying a wide range of different figures (and even vehicles) in a tropical setting. 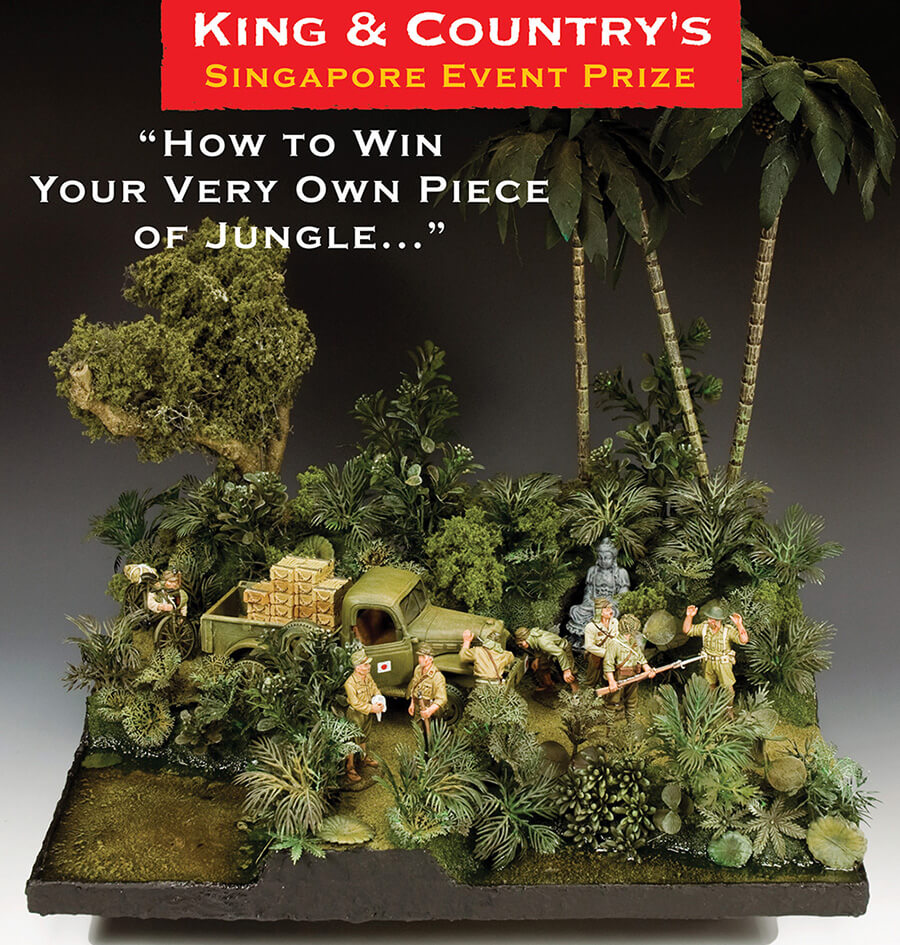 Normally when I am writing about dioramas it’s usually about some great piece that my brother Gordon has just built.

This time it’s a wee bit different... Here is one that I designed and built. As you can see it shows K&C U.S. Marines storming one of the principal gates that led into the ancient citadel of Hue, Vietnam’s old imperial capital.

The model itself measures some 40” long by about 20” wide. Outside the citadel walls and gate is a water-filled moat you might just see.

Also of interest are the two Buddhist ‘swastikas’ carved in stone above the main gate, symbols of the Emperor’s Buddhist faith. The cobble-stoned roadway we made wide enough to accommodate wheeled vehicles and tracked ones, including a big one we are currently working on that will be released later this year or early next.

Most of the design and construction work of the diorama was done at my home after work in the evening and also at weekends.

Once the model was complete and partially assembled I took it to Gordon’s Workshop where I painted and weathered the final assembly.

Altogether it took just over 2 months to complete but it was also very relaxing and fulfilling to be working with my hands again... a lot of fun! 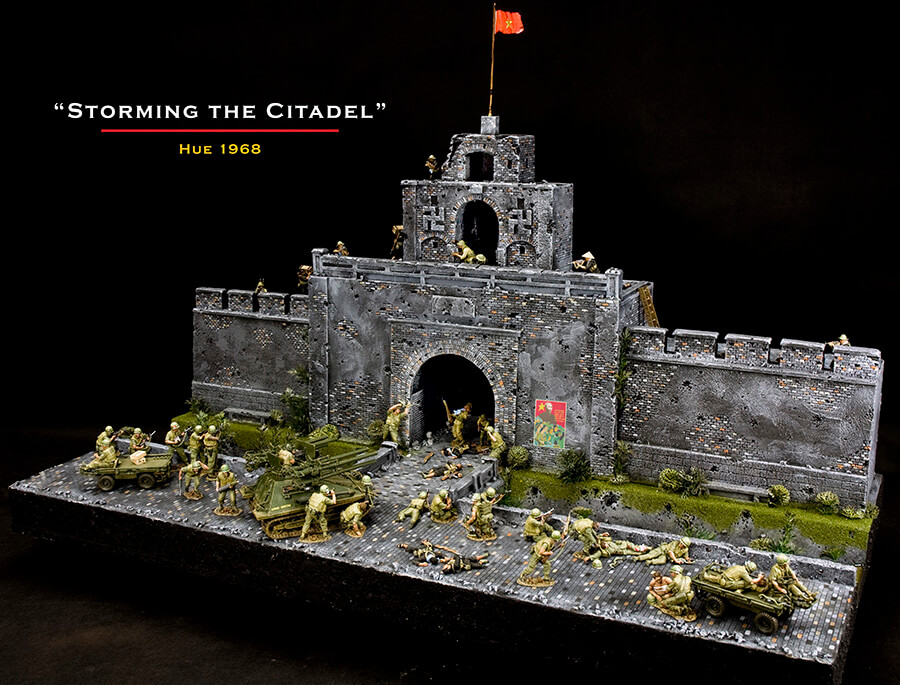 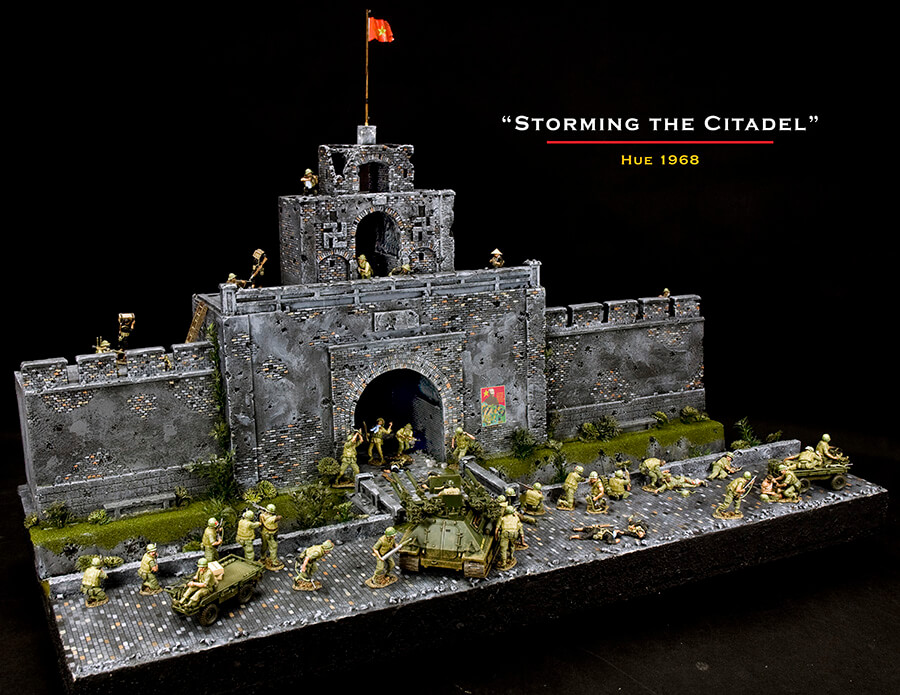 On the Burma Road

A couple of months back, in conjunction with our “Aussie trip” down under, Gordon produced a little jungle dio / display to show off the Australian Patrol which we were then previewing in Brisbane, Sydney and Melbourne.

During that visit several collectors suggested we try making a slightly bigger version that might even be able to accommodate a vehicle or two.

Well, here it is… With a stone statue sitting alongside the road as Japanese troops push their way forward in Burma in hot pursuit of the retreating British forces.

This little figurine was purchased at a roadside souvenir stall in Thailand, quite near the Burmese border. Gordon just repainted and ‘dry-brushed’ it and gave it a slight covering of green moss. 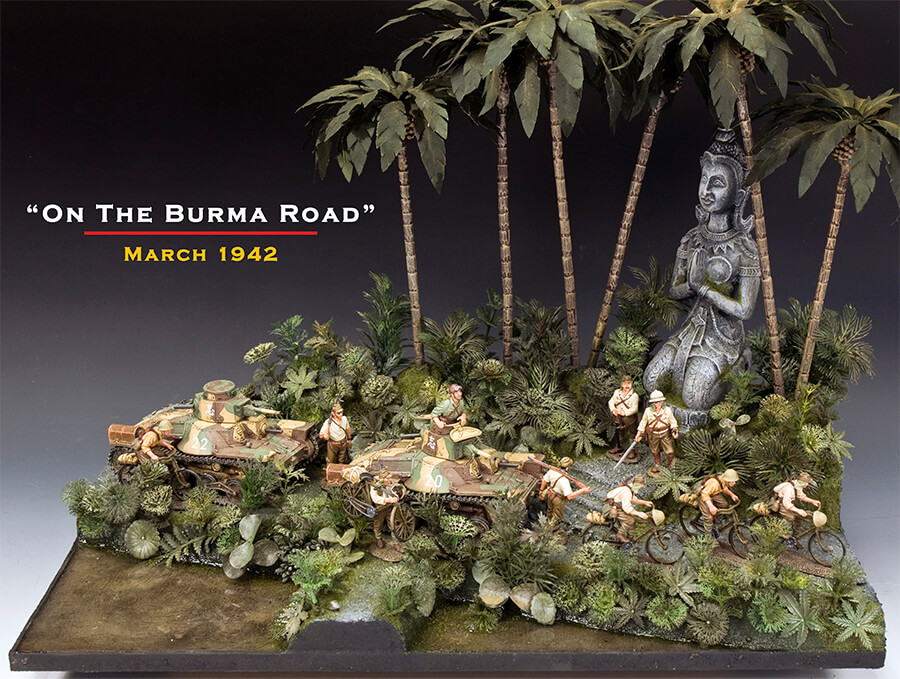 When Gordon completes a dio / display we like to bring it out of the workshop and into H.Q. to photograph it and try out some different 'scenarios'. 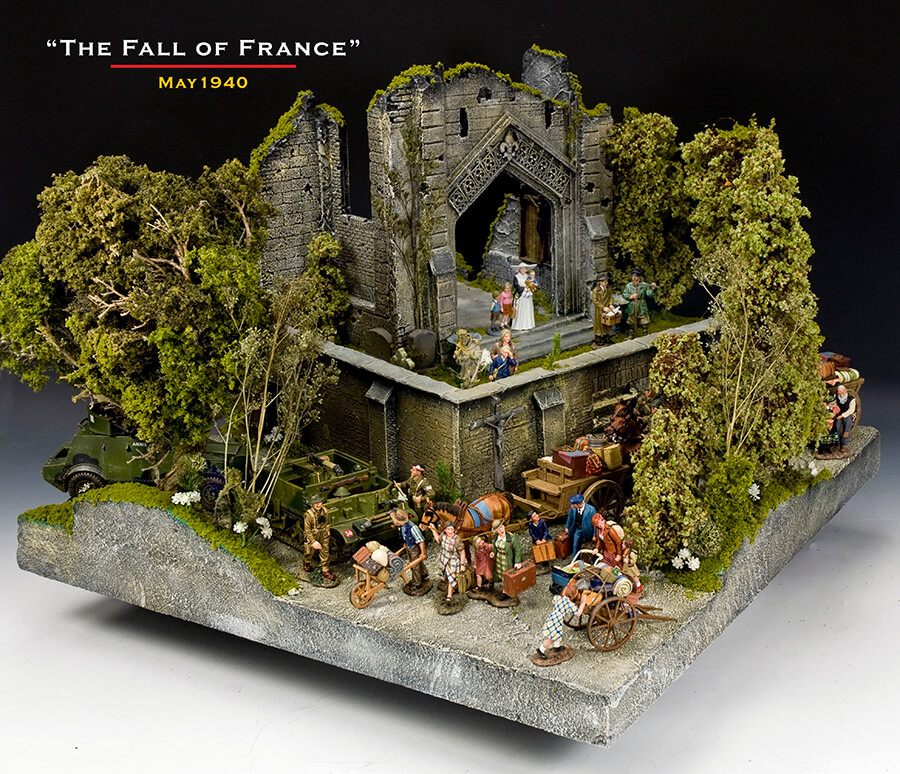 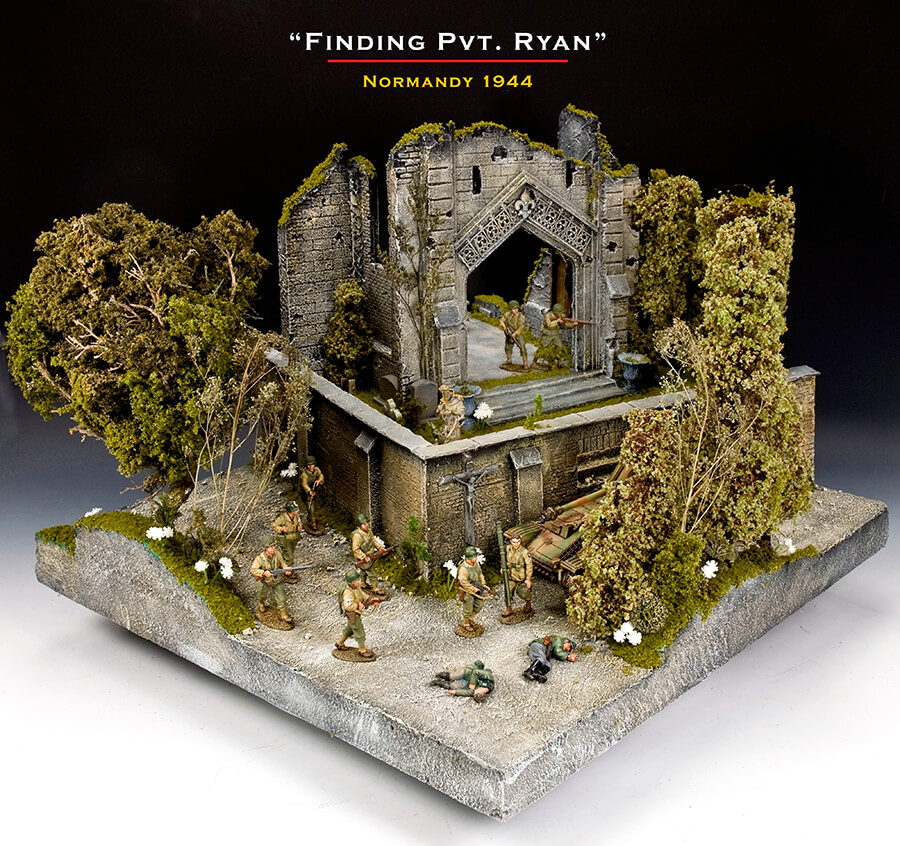 Following on from the successful launch of our new ‘VIETNAM WAR’ series at the recent ‘Texas Toy Soldier Show’ here is a little peek at a different side to the war... from the Australian point-of-view.

As most of you may know, Australia was one of America’s staunchest Allies during this conflict and provided troops (advisers, special forces, infantry, artillery and armour as well as Royal Australian Air Force plus other support personnel) to help South Vietnam in its struggle.

Among these Australian soldiers were men from the Royal Australian Regiment.

Here is the first small ‘Advance Guard’ of ‘Aussies in Vietnam’ which we will be launching in Australia during the Annual ‘OzTrip’ to Brisbane, Sydney and Melbourne in July.

Besides, click the diorama image , you will see another little look at Gordon’s little ‘Jungle Track’ diorama... This time with some of our upcoming NVA & VC in position. 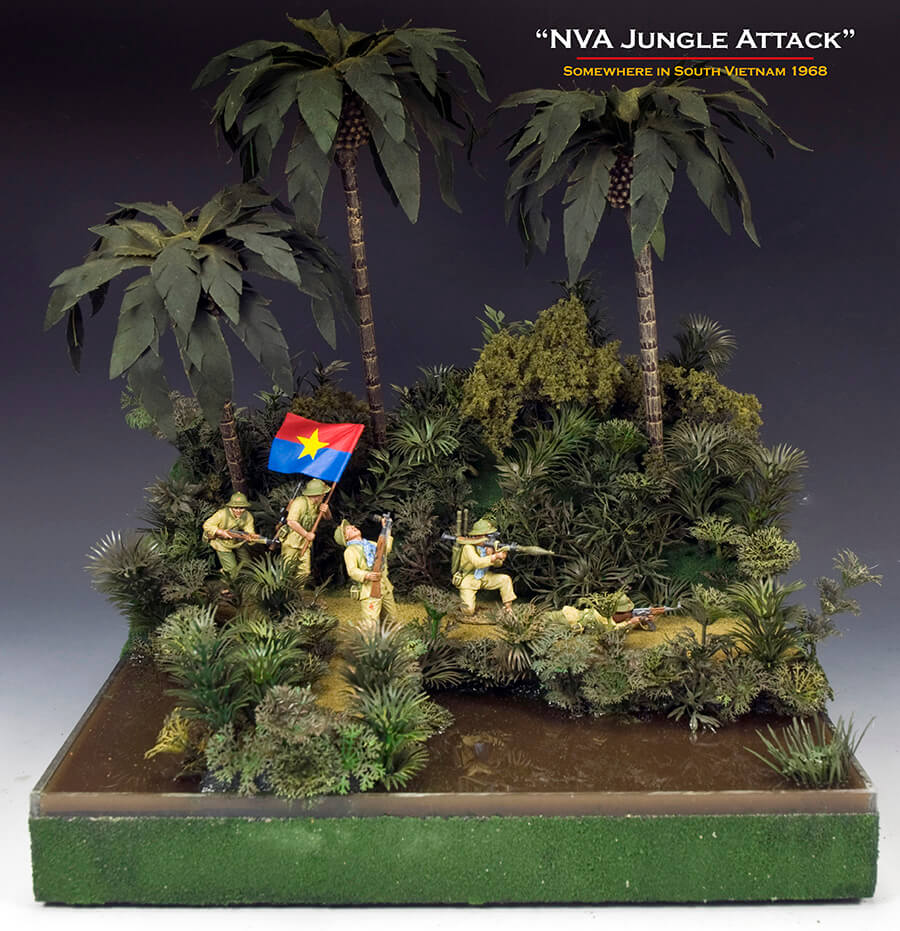