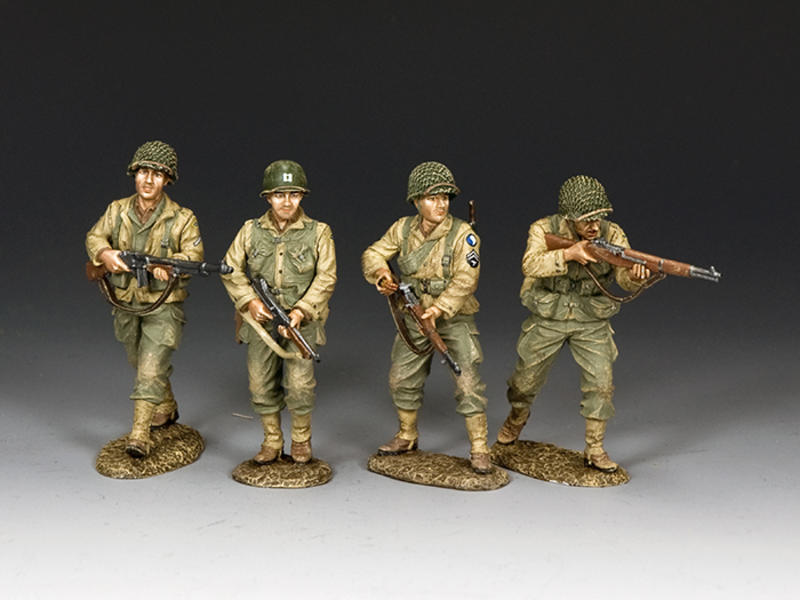 “SAVING PRIVATE RYAN” is a very special war drama film for many of us history movie buffs and especially so for myself and K&C. Back in 1997, through a Hollywood friend and fellow collector, I heard about a big new D.Day movie that was already being filmed in Britain and Ireland by none other than Steven Spielberg. At the time all we knew was that it featured American paratroopers and U.S. Rangers and was centered around Normandy and Omaha Beach. And so, K&C produced some of its very first American D.Day soldiers which began our entire D.Day range which continues to this day. Journey forward quite a few years to when we met Capt. Dale Dye U.S.M.C. ret’d., the military advisor on ‘Ryan’ and countless other great war movies and discussions about doing a special ‘tribute’ to a fantastic movie and the real ‘heroes of D.DAY’. This 4-figure set (the first of 2) features the perilous journey through the fields and bocage of German-occupied Normandy to try and find PFC James Ryan, 101st Airborne. Capt. John Millar, 2nd Rangers takes the lead carrying his Thompson sub machine gun. Backing him up is PFC Reiben with the BAR ( Browning Automatic Rifle). Next to him is Cpl. Upham, not a Ranger but an interpreter borrowed from another unit. The final member of this first 4-man squad is Pvt. Jackson, a left-handed sniper holding his bolt action M1903 Springfield with telescopic sight. All four men will be joined next month (October) by our second ‘Searching for Pvt. Ryan’ set which includes Sgt. Mike Horvath, Pvt. Mellish, Medic Irwin Wade and PFC Caparzo... Don’t miss out on a terrific movie and ... 2 x outstanding sets of D.Day soldiers!