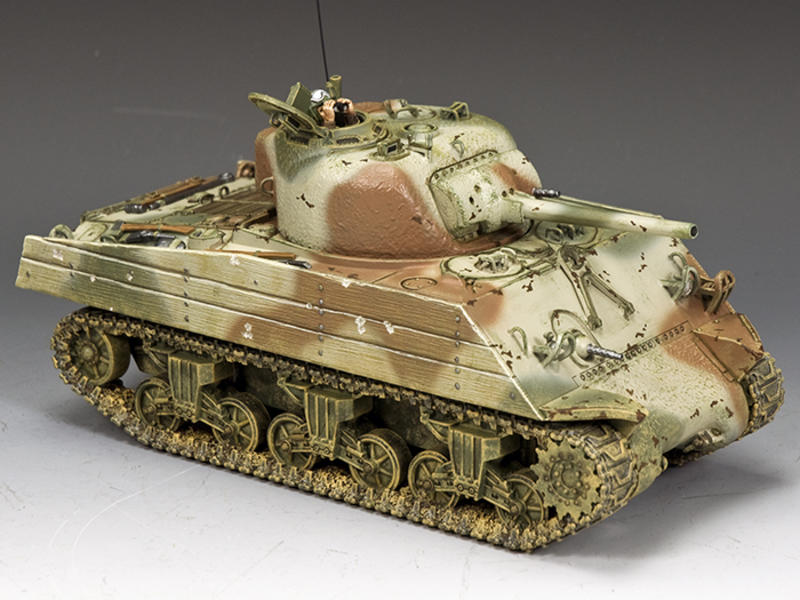 The M4 Sherman with its powerful 75mm main gun and strong armour was more than a match for any Japanese tanks of WW2 as well as their anti tank artillery. Mid 1944 saw the replacement of most of the Marine Corps tanks battalion’s earlier M3 Stuarts with the more powerful, heavier armoured M4 Shermans. Although easily ‘out-gunning’ the enemy armour a new threat erupted when Japanese suicide teams, wrapping themselves with explosives, threw themselves onto American tanks. Marine Corps ‘tankers’ improvised a whole range of field modified methods to keep the enemy at bay. One common practice in the Pacific was to attach thick timber planks on each side of the tank to ward off the enemy attaching adhesive or magnetic mines and explosives. They also provided additional protection against Japanese anti tank guns. This great new K&C Sherman has also been camouflaged in shades of olive drab... rust-coloured brown and desert sand – it’s typical of U.S.M.C. combat operations of this late war period. Our model also comes complete with the rare sighting of a USMC tank commander appearing just above the rim of his turret hatch to get a better look at the enemy. Together with a high quality full-colour presentation box this K&C Pacific Sherman is a welcome reinforcement for all our fighting Marine riflemen battling their way up from the beach... into the jungle... and all the way to Tokyo!